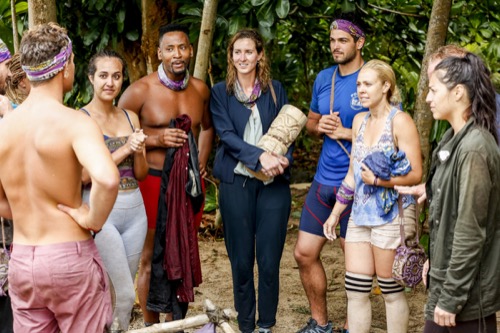 Tonight on CBS Survivor: David VS Goliath airs with an all-new Wednesday, October 03, 2018, Season 37 Episode 2  and we have your Survivor recap below. On tonight’s Survivor season, 37 episode 2 called “The Chicken Has Flown the Coop,” as per the CBS synopsis, “One tribe will bring balance to their game with an immunity win. Also, an early showmance could paint a target on a pair of castaway’s backs”

The rain is taking its toll on the tribes and Pat’s leaving decreased everyone’s moral. Every single day, day in and day out, it rains with strong winds. At the Goliath tribe, everyone is awake and huddled together. The next morning, there are teeth chattering and no success in making fire. Angelina is crushed, she wants a fire so bad. At the David tribe, they seem to be more positive. Christian is happy they did go to trial, they wanted to get rid of Nick and he likes him and didn’t want to see him go. Bottom line, Christian wants one of the girls to go. Nick comes up with a name for his alliance with Christian, Mason-Dixon.

There is tree mail, it includes a fire making kit to assist the tribes since they are unable to make a fire because of the rain.

Kara is having a tough time being in alliance with Dan because he is so obvious. Alex thinks Dan is blinded by Kara’s good looks and believes it is a bad move on his part. Jeremy searches Dan’s jacket, he finds his idol and is not surprised because Dan is playing with his heart, not his brain. Jeremy tells Mike about the idol.

Davie is trying to continue being a provider for his tribe, to guarantee his security. While looking for food, Dan finds himself an idol, he is thrilled.

Lyrsa is being labeled as the weakest player and if her tribe ends at tribal, she is going to find herself being voted out.

Natalie is not thrilled about how her tribe is always having fun and take nothing seriously. She is trying to lay low and just get along with everyone. Meanwhile, the rest of the tribe are talking about voting her out. John, on the other hand, would like to align with Natalie because nobody would suspect them in an alliance.

Time for the Immunity Challenge. One person from each tribe is going to climb a ladder, retrieve a key that they will use to unlock their boat. Then they have to paddle out and retrieve bags of puzzle pieces. At the finish, they will balance a wobbly table, while attempting to solve a block puzzle. The first tribe to finish wins immunity and reward; a deluxe fishing kit. Goliath has one extra player, Natalie is sitting out. Goliath has established a lead, their puzzle is completed, they just have to back up to their spots without dropping the puzzle. That is it, Goliath wins immunity and reward. Someone from the David tribe will be going home.

At the David tribe, everyone talks about how the Goliath tribe is invincible. The plans are going for Lyrsa but Gabby has weird vibes and feels uneasy. She is worried that Lyrsa is not strong on challenges and neither is she, so she could be next. Lyrsa thinks it is Jessica is the one that is spearheading the campaign to get rid of her. The tide is turning in the tribe and Christian couldn’t be happier, now the majority is wanting to get rid of Jess.

Time for Tribal Council, everyone grabs their torch and lights them. First tribal on this sixth day of the game. Lyrsa tells Jeff that the rain was brutal. Elizabeth says that they became a family very quickly. Lyrsa says that you could cut the tension in the tribe now with a knife, she knows she is on the chopping block and that she is the weakest link. Gabby thinks that everyone on the tribe is smart and they are all playing. Christian says that the votes are not organized. Jeff asks what the nerve level is on the tribe. Jessica says it is at a ten right now.

Time to vote. We see Jessica’s vote, she voted for Lyrsa. Lyrsa votes for Jessica; so that cancels out the two. Jeff counts the votes; it’s a tie, four votes Lyrsa and four votes Jessica. There is one vote left, Jessica is voted out and this is officially the first blind side of the season.