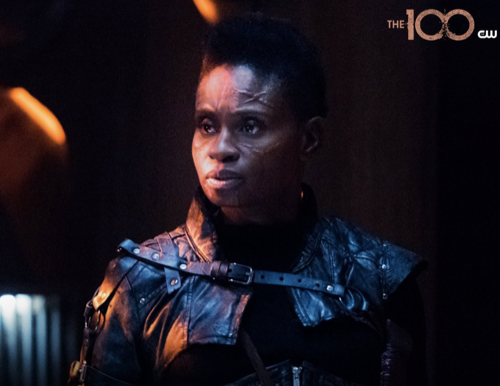 Tonight the CW series The 100 airs with a Tuesday, July 10, 2018 season 5 episode 10 and we have your The 100 recap below. On tonight’s episode called, “Sic Semper Tyrannis,” as per the CW synopsis, “The growing fractures in Wonkru threaten to explode once and for all. Meanwhile, in Shadow Valley, Murphy starts a fire, unleashing catastrophic results.”

Abby works on a patient. Diyoza watches over her. McCreary comes in. Abby tells him he is going to have issues soon enough because he is untreated. McCreary tells Diyoza his people know she didn’t trade for him. She is glad she has all of the guns. McCreary leaves. Diyoza asks Abby how long McCreary has. Abby tells her one week if he continues to go untreated. Diyoza is glad.

Murphy thinks they need to stick to the same plan, kill the pilot. Then they pop off their collars and run. Raven and the others talk. Murphy walks away and starts a fight between McCreary’s guys.

Clarke comes to see Maddie who tells her Octavia is sick. She is unconscious. Maddie is whisked away. Clarke talks to Bellamy. He is upset that he had to poison his own sister to save them. He tells her that Indra is going to take over.

Indra and the others gather around Octavia’s bedside trying to figure out what is wrong and how they can help her. Indra goes to tell the group. They all begin to argue about Indra taking over. Indra tells Bellamy she cannot stop the war. But she knows who can.

Bellamy goes to Clarke and tells her Maddie needs to lead. She can stop the war. Clarke tells him no. He leaves her.

Murphy tells McCreary about the cure. He tells him to take his friends and leave. Raven tries to talk Shaw into coming with them. He refuses. They won’t be safe with him. She jokes that they will kill him if he doesn’t come with them. He accepts.

Indra goes to visit her daughter. She tells her what Maddie is. Gaia already knew. She doesn’t want to give the flame to Maddie, it would be treason. Gaia tells her Maddie must choose for herself. Gaia goes to see Maddie and Bellamy. Gaia tells her she needs to choose. Maddie wants to know what will happen to Clarke if she doesn’t do it. Bellamy tells her Clarke will be dead. Indra heads back to see Octavia. She is waking up. The dialysis is working. Octavia comes to and tells them Bellamy poisoned her. Indra takes out one of them and tells the rest that no one is leaving this room.

Diyoza’s people tell her that McCreary knows about the cure. She tells her people to lock it up. Diyoza comes face to face with McCreary. McCreary announces to the crowd that she was going to let them all die. She calls him paranoid. She tells them all that once they are cured they will all get a plot of land to call their own. Murphy throws something at the crowd from the dark. They don’t see him. It makes them all start fighting. He runs back to Raven and the others who are getting rid of their collars. Marcus warns them that Clarke and Bellamy promised to surrender. Murphy and the others don’t care. They take off. Diyoza leaves the fight to find Abby. She needs to get her to the ship. McCreary comes in. Abby tells him if she dies they won’t have a cure. They all fight. McCreary gets Diyoza in a choke hold. She tells him he is going to kill his unborn child. He releases a little. She stabs him with a shard of glass. She stands, punches him and tells him it is a girl by the way.

Indra tells Octavia that Diyoza agreed to share the valley. Octavia laughs. They hear the ascension call. Octavia cannot believe they are using Maddie. Indra tells her they needed to do it so they wouldn’t lose any more of their people.

Nilah comes to see Clarke who tells her what is going on. Nilah takes out the guard and frees Clarke. They head towards the sound of the ascension horn. Clarke takes off on her and heads to see Octavia. She comes in with a gun and points it at Octavia. Indra tells her to get out. Meanwhile, Maddie is going through the process. The flame puts her out. She isn’t waking. Bellamy is getting nervous. Clarke shows up with armed men. She slaps Bellamy and runs to Maddie. It is too late. Octavia commands they be taken to the rover. She commands her men to arrest the traitors. Bellamy and Gaia are brought away.

McCreary talks to his men. He tells them they still have the doctor. They will find Shaw and kill the rest. They rally around him. He kills Roberts with an axe to the chest.

At the rover, Maddie commands one of Octavia’s men to listen to her. He does. Clarke shoots him. She and Maddie take off in the rover.

Inside the arena, Octavia comes to see her people. She tells them they need to deal with their enemies after they fight the war.