The Bold and the Beautiful Spoilers: B&B Fall Preview – Get a Sneak Peek of the CBS Soap’s Biggest Stories and Shockers 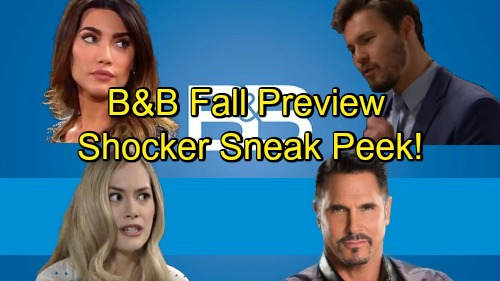 The Bold and the Beautiful (B&B) spoilers reveal that some stunning moments are coming up on the CBS soap. Autumn will be here before you know it, so it’s time to start looking at the drama ahead. We’ve got an exciting fall preview, which includes some high-stakes stories and teasers for all your favorite characters.

First, let’s talk about Liam (Scott Clifton). It’s clear that B&B views him as the driving force of the show, so he’ll remain front and center. The Bold and the Beautiful spoilers say Liam’s path will be an intriguing one. He may zig when you think he’s going to zag. We all know Liam isn’t great at sticking to his decisions, which could spell trouble for his relationship with Hope (Annika Noelle).

Liam and Hope will definitely face some obstacles, but they’ll do their best to work through them together. They’ll both believe they’ve got a bright future as a couple, but do they really? Time will tell, but Steffy will undoubtedly remain in the back of Liam’s mind. His ex is never very far from his heart!

Meanwhile, Bill (Don Diamont) and Katie’s (Heather Tom) custody battle will get nasty. Thorne (Ingo Rademacher) will continue to insert himself in this tense situation, so that should bring even more conflict. B&B fans should see some Daytime Emmy-worthy performances as the chaos erupts.

Other Bold and the Beautiful spoilers say Brooke (Katherine Kelly Lang) will take a stand for Bill. That could be crucial since more fights are brewing in her marriage. Ridge (Thorsten Kaye) will be forced to make a significant choice. He’ll have to decide what’s more important to Forrester Creations: Hope’s line or Steffy’s intimates reboot.

It’s tough to believe Ridge would go against his own daughter. Would he really kick Steffy when she’s down? It seems likely that Ridge will make budget cuts and leave Hope disappointed. That could provoke Brooke’s wrath and push her in Bill’s direction eventually, but we should see plenty of “Bridge” clashing for now.

Eric (John McCook) and Quinn (Rena Sofer) will also be involved in the business storyline. They’ll chime in with their thoughts and contribute to the growing battle. As for Sally (Courtney Hope) and Wyatt (Darin Brooks), they’ll strengthen their bond as a couple. Sally will also find time to focus on her career. She’ll want to prove she’s an asset to FC, so expect some hard work and dedication.

That’s it for B&B’s fall preview! We’ll give you updates as other news comes in. Stay tuned to the CBS soap and don’t forget to check CDL often for the latest Bold and the Beautiful spoilers, updates, and news.