The Bold and the Beautiful Spoilers: Bill Abandons Blackmail Scheme – Terrorizes Hope in Devious Attempt to Break Up Steam

BY hellodrdavis on June 26, 2018 | Comments: 2 comments
Related : Soap Opera, Spoiler, Television, The Bold and the Beautiful 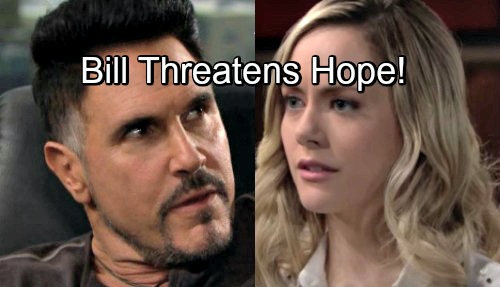 The Bold and the Beautiful spoilers tease that Steffy (Jacqueline MacInnes Wood) may be let loose from Bill’s (Don Diamont) grip…for now. Bill has been blackmailing Steffy by threatening to send Taylor (Hunter Tylo) to prison if Steffy doesn’t marry him instead of Liam (Scott Clifton). Bill has seemed pretty steadfast in his blackmail plot, insisting to Steffy that the two of them were meant to be together and would be married no matter what.

But it looks like Bill may drop the blackmail plot. B&B spoilers say that a blackmailer will have an unexpected and unexplained change of heart. Bill is currently the only blackmailer on the show, so does that mean he’s going to drop his threats against Steffy and let Steam get married? Given Bill’s deep desire for Steffy, it’s doubtful that he’ll drop his plans to get Steffy entirely.

It’s more likely that Bill will just shift his efforts and do something more devious and behind-the-scenes. Even though Bill enjoys puffing out his chest and telling Steffy that she’ll be his, it’s not working that well. Sure, Steffy agreed to delay her nuptials to Liam, but she’s still not running right into Bill’s arms the way he wants. She just keeps getting angrier at Bill.

Actually, if Bill’s smart, he’ll focus his efforts on getting Liam and Hope (Annika Noelle) back together rather than badgering Steffy all the time. It’s clear to everyone that Hope still has strong feelings toward Liam and she wishes the two of them could still be a couple. And Liam has totally let his guard down and believes that there’s nothing else that Bill can do to him. Liam and Hope are the ones who are the most vulnerable to an attack right now.

Perhaps Bill is already up to some sneaky moves. B&B spoilers say that Thorne and Liam will find a threatening note against someone they care about. Could that person be Hope? It would be just like Bill to manufacture a crisis around Hope to re-awaken Liam’s protective side for her. Steffy would surely be irked if Liam was running around trying to protect Hope. This could be the start of Bill’s next plan to break up Steam!

Do you think that Bill will abandon his blackmail plot in favor of a more devious and underhanded scheme? And will Hope be a target? Stay tuned to the CBS soap and don’t forget to check CDL often for the latest Bold and the Beautiful spoilers, updates, and news.