The Bold and the Beautiful Spoilers: Bill Causes Steffy’s Fall and Baby Nightmare – B&B’s Monster Must Be Stopped

BY Heather Hughes on May 23, 2018 | Comments: 3 comments
Related : Soap Opera, Spoiler, Television, The Bold and the Beautiful 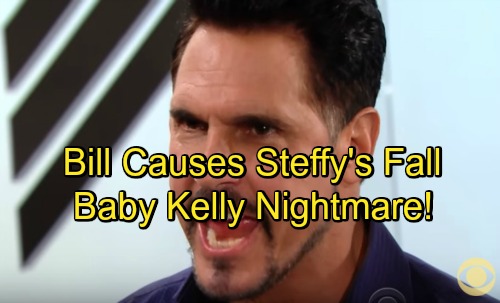 The Bold and the Beautiful (B&B) spoilers tease that Steffy’s dream could soon be in jeopardy. She’s desperate to give birth to a healthy baby girl, but a medical crisis will threaten her plans. Little Kelly could be in grave danger thanks to what’s ahead!

During the week of May 28-June 1, we’ll see the fallout of a shocking confession. After Wyatt (Darin Brooks) reveals the truth about Bill’s (Don Diamont) plot, it’ll set disastrous events in motion. Liam will lash out at Bill for derailing his love life and messing with the hearts of two women. He’ll be upset about Steffy and Hope (Annika Noelle) getting caught in all this drama.

Steffy will also fume over Bill’s devious plan. She’ll want absolutely nothing to do with him after this stunning exposure. Steffy may chew Bill out briefly, but that’s it. She’ll insist she never wants to see him again. Naturally, Bill won’t give up without a fight. He’ll beg Steffy to believe that they’re meant to be together, but she’ll just want him to leave her alone.

The Bold and the Beautiful spoilers say Steffy will also take a serious fall on next week’s new B&B episodes, May 28 – June 1. Since all this Bill aftermath will be going on, perhaps he’ll be to blame for the tumble. It’s easy to imagine Steffy scrambling to get away and falling in the process. Bill may inadvertently lead to Steffy’s accident, but his intentions won’t matter. He would still be blamed by Steffy and Liam for this scary crisis.

Of course, Steffy and Liam have already lost one baby. B&B probably wouldn’t be cruel enough to let them lose another. Steffy’s come this far in her pregnancy, so the show might as well take advantage of that. If they don’t go home with a kid, it’d make this lengthy baby plot seem pointless.

Plus, Liam and Steffy’s daughter already has a name. Fans want to meet little Kelly, so there’s a good chance she’ll pull through. Nevertheless, Bill will deserve “Steam’s” wrath over this nightmare. Their daughter could’ve died, so Bill needs to pay if he’s behind Steffy’s fall. This monster has to be stopped!

Let’s hope Steffy will file a restraining order and get Bill out of the picture. Liam could also work on revenge mission. There’ll surely be some way to get true retribution! We’ll give you updates as other Bold and the Beautiful news comes in. Stay tuned to B&B and don’t forget to check CDL often for the latest Bold and the Beautiful spoilers, updates, and news.