BY Marcy Cohen on September 13, 2018 | Comments: one comment
Related : Soap Opera, Spoiler, Television, The Bold and the Beautiful 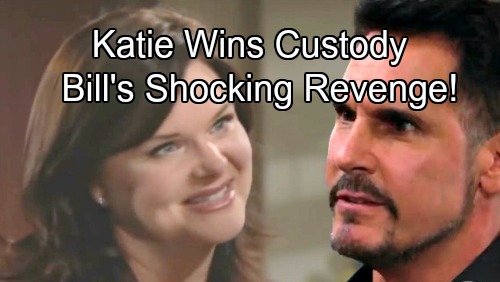 The Bold and the Beautiful (B&B) spoilers tease that Katie (Heather Tom) will grow increasingly nervous. She’s got a tough custody battle ahead of her, but Thorne (Ingo Rademacher) will promise to get her through it. He’ll insist that Katie can pull off a victory and keep Bill (Don Diamont) at a distance.

Thorne believes that’s what’s best for Will (Finnegan George), so he’s convinced Katie of that, too. It’s true that Bill isn’t exactly a great role model, but Thorne is definitely overstepping here. He just jumped right in and started acting like he was entitled to make major parenting decisions.

Katie should really be making choices for herself, but it appears she’ll keep going along with Thorne’s plans. That could spell trouble down the road. After Katie accepts Thorne’s upcoming proposal, they’ll start gearing up for a quick wedding. Engagements never last long on B&B!

The Bold and the Beautiful spoilers hint that Bridget (Ashley Jones) and Donna (Jennifer Gareis) are headed back to town, which points to the Thorne and Katie nuptials actually happening. Since the custody case should wrap up before that, it could be a sign that Katie will emerge victorious. If she lost to Bill, she’d probably be too upset to tie the knot so fast.

It sounds like Bill’s poised to become the loser of the custody war, which will give him an opportunity to lean on Brooke (Katherine Kelly Lang). A “Brill” reunion certainly seems to be brewing, so it makes sense to have Bill crying on Brooke’s shoulder. However, Katie shouldn’t get cocky about her potential win in court. You can bet that Bill will fight back somehow.

The Bold and the Beautiful fans know how Bill operates. He doesn’t just get mad; he gets even. There’s a good chance both Thorne and Katie will be on the receiving end of his wrath. Brooke may try to rein Bill in a bit, but she should angry as well. She fully supports Bill’s efforts to keep Will in his life, so she may understand his need for revenge when it all goes wrong.