The Bold and the Beautiful Spoilers: Friday, September 14 – Steffy Calls Out Ridge – Thorne Puts A Ring On It

BY hellodrdavis on September 13, 2018 | Comments: one comment
Related : Soap Opera, Spoiler, Television, The Bold and the Beautiful 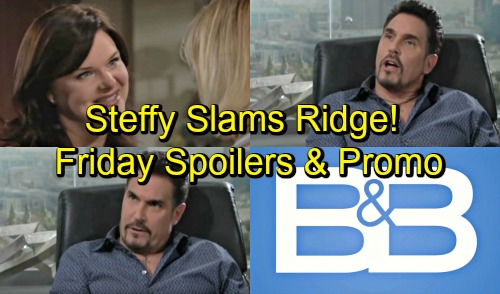 The Bold and the Beautiful spoilers for Friday, September 14, tease that Brooke (Katherine Kelly Lang) and Katie (Heather Tom) will continue their argument over Bill (Don Diamont) and the upcoming custody case. Brooke will continue to lobby on Bill’s behalf, arguing that Katie shouldn’t try to exclude him from Will’s (Finnegan George) life.

But Katie isn’t going to back down at this point. She’s committed to fighting for control over her son’s relationship with Bill and protecting Will from Bill’s inevitable disappointments. She’ll point out to Brooke that Bill has promised to change so many times in the past, but he never does. Katie will feel that she’s just doing what’s best for Will.

Meanwhile, Bill and Justin (Aaron D. Spears) will chat about the custody matter, and Bill will promise that the situation’s going to get a whole lot messier for everyone as the custody case goes forward. Bill’s going to bring up Katie’s alcoholic past and show everyone that Katie’s no angel, either. It’s really going to get ugly.

Next, on the new B&B episode on Friday, September 14, Steffy (Jacqueline MacInnes Wood) will put Ridge (Thorsten Kaye) on the spot. She’ll outright question his motives for backing Katie and Thorne (Ingo Rademacher) in the custody dispute. She’ll probably point out that this is just a way for Ridge to get back at Bill for everything he did to break up her marriage to Liam (Scott Clifton). Will Ridge deny it or own it?

Finally, on Friday, September 14, Thorne will beautifully express his love and commitment to Katie…and he’ll propose! Katie will be pleasantly surprised but will want to be sure that Thorne has made his proposal for the right reasons, and not just because of the custody case. The two will discuss and it looks like Katie will happily accept.

It sounds like a lot of great B&B drama is heating up for Friday’s episode, so be sure to stay tuned! We’ll give you updates as B&B news comes in. Stick with the CBS soap and don’t forget to check CDL often for the latest Bold and the Beautiful spoilers, updates, and news.