The Bold and the Beautiful Spoilers: Liam Pushed to His Limit as Hope and Steffy’s War Intensifies – Lope Crashes and Burns 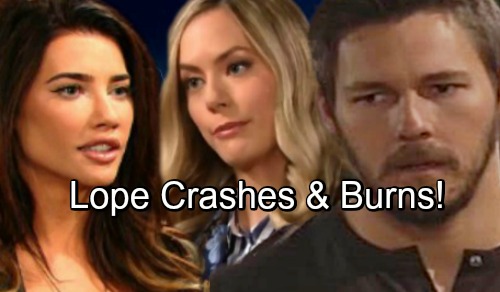 The Bold and the Beautiful (B&B) spoilers tease that Liam (Scott Clifton) will find himself in a difficult position soon. Of course, he’s already been stuck in some serious drama. Liam has two significant women in his life. He’ll always love Steffy (Jacqueline MacInnes Wood) and cherish the time they spent as a couple. They made sweet baby Kelly together, so that added to their special bond.

However, Liam’s married to Hope (Annika Noelle) now. He needs to put her first and honor the commitment he made. Liam certainly loves Hope and wants to make all her dreams come true. They’re also expecting a child together, which will continue to strengthen their connection.

Since Liam’s so close to both ladies, he’ll end up in some impossible situations in the coming weeks. B&B spoilers hint that Steffy and Hope’s war will spiral out of control. Brooke (Katherine Kelly Lang) warned Ridge (Thorsten Kaye) that he might’ve ended the Hope-Steffy truce for good. It’s clear that they’re back to being rivals, so there’ll be more rounds of tension and backstabbing as time goes on.

Liam will do his best to side with Hope, but how long will that plan last? There are a couple of reasons he might turn against her. The first one is simple. Liam could just get fed up with all the feuding and argue that Hope should give it a rest. She’s the one who touts strong morals, so he may think she needs to be the woman to stand down.

Naturally, Hope would feel betrayed and neglected. As Liam’s wife, she wants his full support. If Hope eventually doesn’t get it, that could lead to plenty of strife in their marriage. Still, there are other strategies that The Bold and the Beautiful could use here. Another way to drive Liam and Hope apart would be through Kelly.

If Liam manages to keep his Hope support in play, it’ll drive Steffy up the wall. She’s been open to letting Liam see Kelly anytime, but she could ultimately decide to make it more difficult. If that keeps up, Liam and Steffy could take a cue from Bill (Don Diamont) and Katie (Heather Tom). It’s not hard to imagine a custody battle heating up between them.

Liam could come to resent Hope at some point. Many Bold and the Beautiful viewers suspect Hope will lose the baby, which could be the final nail in the coffin. It sounds like “Lope’s” going to face major hurdles, so stay tuned. We’ll give you updates as other B&B news comes in. Stick with the CBS soap and don’t forget to check CDL often for the latest Bold and the Beautiful spoilers, updates and news.