The Bold and the Beautiful Spoilers: Bill Hits the Roof Over Wyatt’s Bombshell – Father and Son Battle It Out Over Huge Decision 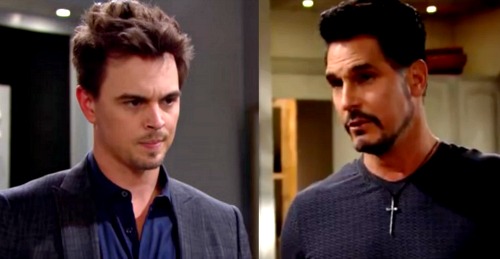 The Bold and the Beautiful (B&B) spoilers tease that Wyatt (Darin Brooks) will have to break some bad news. He recently accepted a new position at Forrester Creations, which means he’ll have to give Bill (Don Diamont) his resignation. Wyatt will definitely be a bit wary as he heads into Bill’s office. He’ll assume his dad’s going to blow his top and he’ll be right about that.

Nevertheless, Wyatt will go ahead and rip the bandage off. He’ll reveal that he’s FC’s new social media manager, so he’s leaving Spencer Publications behind – for now at least. Wyatt will try to soften the blow by arguing that he could come back one day. He’ll just suggest that he needs to do some exploring. Wyatt doesn’t want to get stuck in a rut and miss out on a great opportunity.

Bill’s been making progress with Will (Finnegan George) and Liam (Scott Clifton). He thought Wyatt was the one he didn’t have to worry about, but he won’t be so sure after his son’s updates. Bill will push Wyatt to stick around and ditch this notion of abandoning his family’s company. He’ll hope Wyatt will have a change of heart, but that’s not going to happen.

The Bold and the Beautiful spoilers say Wyatt will stand his ground on this. He’ll contend that he really wants to give this Forrester job a shot. Wyatt will believe he’s the perfect fit for the position, so he’ll ask Bill to get on board.

It doesn’t hurt that Wyatt’s girlfriend is also working at Forrester. Bill may bring that up, but Wyatt will insist that Sally (Courtney Hope) isn’t his sole reason for leaving. This is about a personal journey and challenging himself. B&B fans can expect Bill to make peace with Wyatt’s decision eventually. He still won’t like it, but he won’t hold it against his son.

Will Wyatt’s new Forrester job work out well for him? The Bold and the Beautiful spoilers say it could lead to some interesting scenarios, so keep watching for some surprises. We’ll keep you posted as other B&B details emerge. Stay tuned to the CBS soap and don’t forget to check CDL often for the latest Bold and the Beautiful spoilers, updates and news.

Bold moves, broken promises, and BIG consequences – It’s all coming up this week on #BoldandBeautiful! pic.twitter.com/V228Puik5F