The Bold and the Beautiful Spoilers Next 2 Weeks: Wounded Bill Rushed to Hospital – Hope and Liam’s Shocking Baby News 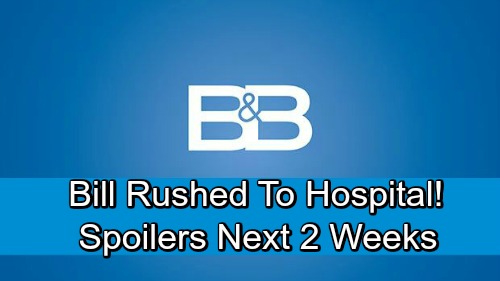 The Bold and the Beautiful (B&B) spoilers for the next two weeks tease that the conflict will rev up. During the week of October 15-19, Brooke (Katherine Kelly Lang) and Ridge’s (Thorsten Kaye) hostility will reach a boiling point. They’ll spar over old issues as well as new ones, but Brooke won’t think they should let this destroy their love.

Ridge will keep barking about the way Brooke locked lips with Bill (Don Diamont). He’ll struggle to get past the betrayal, but Brooke will beg him to try. She’ll plead with Ridge to tell her that forgiveness is possible. The Bold and the Beautiful spoilers say Ridge will remain angry with his wife, but he won’t walk away from her. Instead, he’ll shift most of his fury to Bill – the instigator of the kissing chaos.

In the meantime, Charlie (Dick Christie) will decide he needs to take the next step with Pam (Alley Mills). He loves her and they’re undoubtedly the most solid relationship on B&B. Charlie will realize he’s been dragging his feet for no reason, so he’ll get Pam a ring and pop the question.

The Bold and the Beautiful spoilers say the proposal will catch Pam off guard, but she’ll happily accept. There’s nothing she’d love more than to be Charlie’s bride. Over with Katie (Heather Tom), she’ll tell Bill they can make some custody agreement changes. That’s thanks to Brooke’s admission about Ridge and the judge pressure.

Bill will be ecstatic, but Thorne (Ingo Rademacher) will be annoyed and confused. He’ll corner Katie and demand some answers about this sudden change of heart. Elsewhere, Hope (Annika Noelle) will get updates on Brooke and Bill’s steamy moment. She’ll learn the truth from Steffy (Jacqueline MacInnes Wood) and run off to find her mom.

Hope will try to figure out why Brooke would go behind Ridge’s back like this. She’ll be perplexed by Brooke’s choice of kissing partner, too. Of course, Brooke will express remorse and insist that she’s going to steer clear of Bill. That won’t be an easy task, so Hope may have lingering concerns.

Nevertheless, Hope will end up defending Brooke to Steffy. They’ll face off over Brooke’s disloyalty, but Hope will probably hold Bill responsible. Later, Hope will pay Dr. Phillips (Robin Givens) a visit with Liam (Scott Clifton) by her side. They’ll be excited as they prepare to find out the baby’s gender.

The week of October 22-26 will bring some bliss for the proud parents. After Liam and Hope learn whether they’re having a boy or a girl, they’ll discuss the future. All the pieces are falling in place for their perfect life together, but some drama has to hit this couple eventually.

Back with Ridge, he just won’t be able to let go of his rage. Bill will manage to get both Thorne and Ridge even more riled, so they’ll go looking for him. With a little help from Pam, they’ll track Bill down and confront him about his actions. The Bold and the Beautiful spoilers say a simple fight will turn into a horrific disaster!

Bill face some serious injuries once things get out of hand, so he’ll ultimately land in the hospital. It looks like some serious turmoil’s ahead. We’ll keep you posted as other B&B news comes in. Stick with the CBS soap and don’t forget to check CDL often for the latest Bold and the Beautiful spoilers, updates and news.