The Bold and the Beautiful Spoilers: Hope Drifts Toward Another Spencer – Wants Wyatt Back, Sally’s Got Fierce Competition

BY Kinsley Goldman on June 19, 2018 | Comments: one comment
Related : Soap Opera, Spoiler, Television, The Bold and the Beautiful 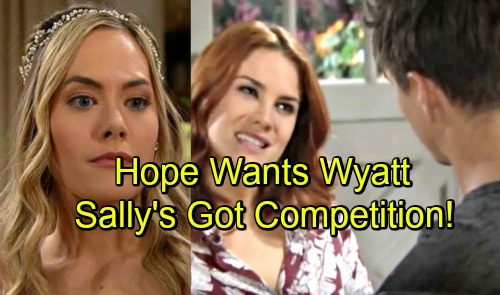 The Bold and the Beautiful (B&B) spoilers tease that huge clues are emerging about a new storyline. Let’s consider all the evidence. For starters, Sally’s (Courtney Hope) back and has immediately started bonding with Wyatt (Darin Brooks). They’re beginning a romance, but it won’t be without obstacles.

Love triangles tend to be front and center on B&B. If character falls in love with another character, there’s bound to be some interloper along the way. You can bet Sally won’t be the only one with growing feelings for Wyatt.

The Bold and the Beautiful spoilers say things won’t be just peachy for Steffy (Jacqueline MacInnes Wood) and Liam (Scott Clifton), but their drama will come mostly from Bill (Don Diamont). He’ll blackmail Steffy in hopes of locking down their future, which could result in serious “Steam” problems.

This will undoubtedly involve trigger-happy Taylor (Hunter King), so Steffy may feel obligated to protect her mother – at least initially. However, Liam may know better than to go running back to Hope (Annika Noelle). He jumped the gun on ditching Steffy last time and left Hope devastated.

Even if Liam were to come sniffing around again, Hope really needs to wise up and move on. She’s just going to get her heart broken all over again if she doesn’t! Of course, The Bold and the Beautiful probably won’t leave Hope single for long. That’s where another, less waffle-y ex could come in.

The Bold and the Beautiful spoilers say Eric (John McCook) will go against the rest of the family’s wishes and ask Sally to join Forrester. He’ll dismiss any complaints and insist that she could be a real asset. It’s easy to imagine Sally and Hope feuding right off the bat.

As Sally and Wyatt get closer, Hope may become protective. She knows her former flame has been through a lot, so she won’t want to see him get hurt again. That could lead to Hope making a move of her own. Will she eventually decide Wyatt’s the one who got away?

Both Sally and Hope were burned by their previous love interests, so the stakes will certainly be high. Another round of heartache could cause either one of them to truly crumble. We’ll give you updates as other B&B news comes in. Stick with the CBS soap and don’t forget to check CDL often for the latest Bold and the Beautiful spoilers, updates, and news.