The Bold and the Beautiful Spoilers: Spencer-Forrester War Breaks Out – Unhinged Bill Plays a Dangerous Game 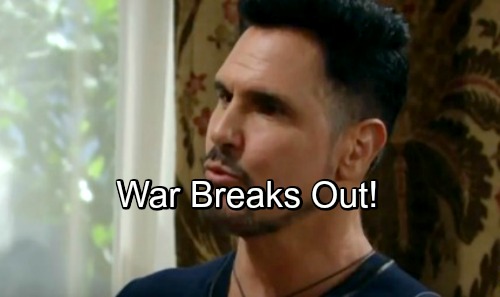 The Bold and the Beautiful (B&B) spoilers tease that Sally (Courtney Hope) could land in big trouble again. However, this time it may not be her fault. Sally has found a loyal supporter in Wyatt (Darin Brooks), so they’re already on the verge of a hot romance. Wyatt intends to help Sally as she seeks her fresh start, which will include a new job at Forrester Creations.

That’s where the next round of drama will begin. Bill (Don Diamont) is currently focused on Steffy (Jacqueline MacInnes Wood), but what happens when he loses this battle? B&B won’t let this monster win in the end. Steffy hates his guts, so there’s no way Bill’s romantic dreams will come true.

The Bold and the Beautiful spoilers say Bill’s going to need a distraction. His rage will be at an all-time high, so that could lead to bad news. Bill will be looking for someone to take his frustration out on. He could easily target Steffy and Liam (Scott Clifton), but he probably won’t stop there. We all know Bill never lets go of grudges. He still loathes Sally, so he could come after her once again.

Of course, Sally isn’t trying to make things work at Spectra anymore. She’ll be joining the Forrester team, so that could leave FC extra vulnerable. Bill has a stake in the company, but that doesn’t mean he won’t target its employees. At that point, he certainly wouldn’t have a problem with destroying Ridge (Thorsten Kaye), Steffy, Sally and everyone else in his path. Bill may even have takeover plans.

The Bold and the Beautiful spoilers say Thorne (Ingo Rademacher) and Katie (Heather Tom) will do some scheming soon. That may be part of a plot to retaliate or at least keep Bill at bay. Katie and Thorne will recruit Bill’s usual hacker, Ken (Danny Woodburn), so it makes sense that they’d be trying to turn the tables.

Is a Spencer-Forrester war brewing? Will Sally play a role in bringing it on? What about Steffy’s eventual rejection and victory? B&B may be creating the perfect storm for Bill’s fury and a vicious battle! We’ll give you updates as other B&B details emerge. Stay tuned to the CBS soap and don’t forget to check CDL often for the latest Bold and the Beautiful spoilers, updates, and news.