The Bold and the Beautiful Spoilers: Taylor Confesses to Attempted Murder, Sacrifices Freedom for Steffy 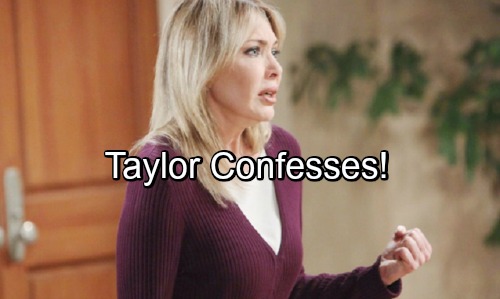 The Bold and the Beautiful (B&B) spoilers tease that Steffy (Jacqueline MacInnes Wood) will feel truly stuck. Thanks to Bill’s (Don Diamont) blackmail, she’ll be forced to make a terrible choice. Steffy can keep her relationship with Liam (Scott Clifton) intact or protect Taylor (Hunter Tylo), but she can’t do both. She’ll be forced to choose between her fiancé and her mother.

To make matters worse, marrying Bill is part of the Taylor protection deal. How can Steffy tie the knot with her stalker? Bill’s done nothing but make her miserable. He’s about the last person she’d want to be married to at this point. Nevertheless, Bill won’t relent. He’ll urge Steffy to take the deal or watch her mom get tossed in jail.

Taylor committed a crime, so Steffy will surely consider letting her go down for it. However, guilt will strike during an upcoming chat. Taylor’s been going to therapy and trying to get her life back on track. She’ll reach out to Steffy and talk about her progress in Friday’s B&B episode.

The Bold and the Beautiful spoilers hint that Taylor will be grateful she’s not in prison. She’ll feel like she’s been given a second chance and she won’t want to throw it away. Of course, Steffy would be throwing it away for her if she turns Bill down. She’ll hate the thought of being responsible for Taylor’s suffering.

What will Steffy decide to do? She might suggest negotiating a bit. Steffy could agree to call off the “Steam” engagement, but stick to her guns on not marrying Bill. She could at least put off the Bill wedding as long as possible. Steffy needs time to come up with some sort of solution.

Fortunately, Taylor may come up with one instead. If Steffy suddenly pulls away from Liam, it shouldn’t be too hard to figure out why. Taylor may realize she’s the reason for Steffy’s latest round of misery. Any good mother wouldn’t be OK with that. Perhaps Taylor will ultimately turn herself in for attempted murder. It’s easy to imagine her sacrificing her own freedom to save Steffy this pain.