The Bold and the Beautiful Spoilers: Hope Explodes as Sally Joins Hope for the Future Line – Fierce Foes Cause Major Drama

BY Heather Hughes on June 24, 2018 | Comments: one comment
Related : Soap Opera, Spoiler, Television, The Bold and the Beautiful 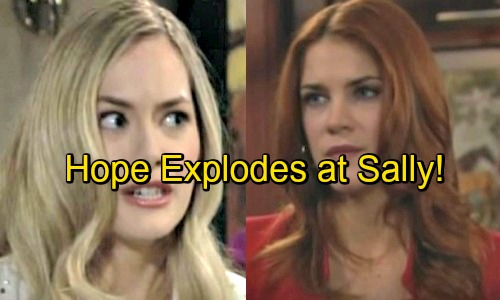 The Bold and the Beautiful (B&B) spoilers tease that a new feud will heat things up. Hope (Annika Noelle) and Steffy’s (Jacqueline MacInnes Wood) conflict has died down, so it’s time for little Ms. Logan to get another enemy. Fortunately, a spirited redhead is poised to take that spot. Sally (Courtney Hope) is about to cause major drama at Forrester Creations.

When Eric (John McCook) offers Sally a position, it’ll lead to some controversy. Sally isn’t exactly well-liked at FC. She stole from the company at one point and that’s hard to get over. Ridge (Thorsten Kaye) will certainly object to Eric’s shocker, but he’s the least of Sally’s problems. It turns out Hope will be a far bigger issue and there’s a good reason why.

The Bold and the Beautiful spoilers say Sally will join the Hope for the Future team. Eric will believe Sally can make some excellent contributions, but Hope won’t be happy. When she hears the news, she’ll immediately corner Eric and push for changes. Hope won’t care where Sally helps out as long as it’s not on her line.

However, Eric will stand by his choice. Sally tends to go for edgier designs, so Eric may suggest it’ll freshen up Hope’s vision and let them become real trendsetters. He’ll need her to put aside her animosity and focus on what’s important.

Eric will urge Hope to find a way to keep the peace, but that plan won’t pan out. Instead, Hope will go on a power trip and leave Sally livid. The Bold and the Beautiful spoilers say Sally will pitch some awesome ideas, but Hope will shut down all of them. She’ll make it clear that this is her line and they’re going to do whatever she wants.

Sally will end up feeling both angry and defeated. It seems like she’s always facing foes who can derail her dreams. Nevertheless, B&B fans know Sally isn’t a quitter. She has moments when she gets down in the dumps, but she always manages to climb out of the darkness.

Sally will inevitably find success somehow. Hope can either get on board or get out of Sally’s way! This Bold and the Beautiful battle should spark some messy schemes and bitter cat fights. B&B viewers won’t want to miss the looming chaos, so stay tuned.

Are you excited to watch Hope and Sally go to war? We’ll give you updates as other details emerge. Stick with the CBS soap and don’t forget to check CDL often for the latest Bold and the Beautiful spoilers, updates, and news.