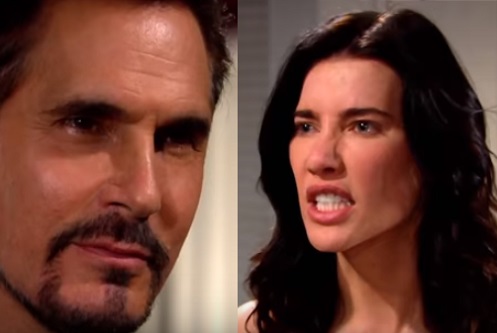 The Bold and the Beautiful (B&B) spoilers for the week of June 25-29 tease that a new romance will bloom on the CBS soap. Wyatt (Darin Brooks) and Sally (Courtney Hope) are both on the rebound, but they don’t care. They just know they enjoy spending time together and they bring each other comfort. Sally and Wyatt might as well take advantage of their sizzling connection!

B&B fans can expect this duo to heat things up soon. The Bold and the Beautiful spoilers state that Wyatt and Sally will have a steamy sex session. When they’re through, they’ll have no regrets. Of course, it won’t take long for the news about “Wally” to spread. Once Thorne (Ingo Rademacher) gets the scoop, he’ll decide it’s time to fill Katie (Heather Tom) in.

Katie will think Thorne’s joking at first. She’ll suggest that he really had her going, but Thorne will insist that it’s true. Wyatt and Sally are romantically involved, so Katie will have to deal with that. She’s already moving on with Thorne, so she has no room to talk. However, that won’t stop Katie from worrying about her ex. She just won’t want to see Wyatt get hurt or taken advantage of.

Other Bold and the Beautiful spoilers say Steffy (Jacqueline MacInnes Wood) will continue to seethe. Bill (Don Diamont) has backed her into a corner and she struggling to find a way out. After making up an excuse to delay the wedding, Steffy will face off with Bill again. She’ll be looking for any possible strategy to wiggle out of this.

Naturally, Bill will stick to his guns. He’ll contend that Steffy needs a man who’s truly committed to her. Bill will reiterate that Liam’s (Scott Clifton) always going to be pulled toward Hope (Annika Noelle). He’ll want Steffy to steer clear of her “baby daddy” and focus on somebody who’s completely devoted instead.

Steffy will snarl about how wrong and disgusting this is. She’ll vow to put an end to Bill’s manipulation once and for all, but that plan could come with some snags. We’ll give you updates as other B&B details emerge. Stay tuned to the CBS soap and don’t forget to check CDL often for the latest Bold and the Beautiful spoilers, updates, and news.