The Bold and the Beautiful Spoilers: Bill Offers Himself To Steffy as Liam’s Replacement – Dollar Still Revisited

BY Sean O'Brien on January 18, 2018 | Comments: one comment
Related : Soap Opera, Spoiler, Television, The Bold and the Beautiful 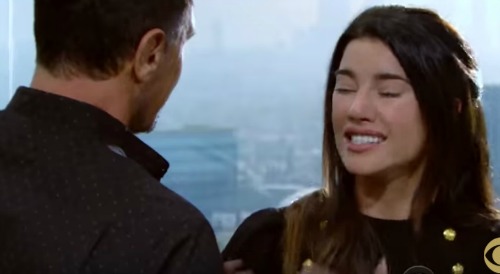 The Bold and the Beautiful spoilers tease that Steffy (Jacqueline MacInnes Wood) will eventually relent. Yes, Bill (Don Diamont) is positioned to become her next great love.

The explosively controversial storyline that saw Steffy sleep with her stepfather won’t be dropped by B&B. Instead, the end of Leffy means that Dollar Still can be revisited.

Some were, understandably, offended that Bill would engage in relations with Steffy. Separate from the family issue, which can’t and shouldn’t be dismissed, one wonders if ageism is included in various viewer’s viewpoints? Now, try saying the three words that ended that last setence three times fast, or typing them just once.

It can be argued that Steffy recognized all of Liam’s qualities during each of their romantic connections. Not meant as a full compliment, it can be argued that Mrs. Spencer’s subconscious awareness of her husband’s weakness made Bill the more attractive option.

Some within the populus might not admit that their recognition of some men being sexist, just as some women are the same, has bent their minds. The twisted outcome of said recognition isn’t an effort to achieve equality, but to shift discrimination. Why else would Bill be tagged as the bad ‘guy’?

All who insist, not suggest, that Bill took advantage of Steffy when she was in a vulnerable state must think that she has no free will. By her own admission, when Liam and Wyatt (Darin Brooks) asked, Bill did not force himself on Steffy, drug her, or whatever.

Steffy appears to be more like Bill then Liam. While Steffy and Liam exist within the same age group, her take on reality is actually more closely aligned to Bill’s then her soon-to-be-anulled husband’s.

This admiditedly subjective truth appears to indicate that Dollar Still is the actual love match, which then leads to a real soapy question. Did Bill manipulate the paternity test Steffy felt compelled to have, meaning he’s the real father of her child, in an attempt to give his son and daughter-in-law a secure family life?

As B&B fans recall, Bill believed that Steffy loved Liam during that time frame. If Steffy comes to admit, acknowledge, or develop feelings for Bill in the future, then the elder Spencer could reveal what he did, if he did as was suggested.

Regardless of this speculative, secondary issue, what’s more easily projected is the revisiting of Dollar Still. A future couple that will likely never be accepted by many fictional Los Angeles residents and B&B viewers.