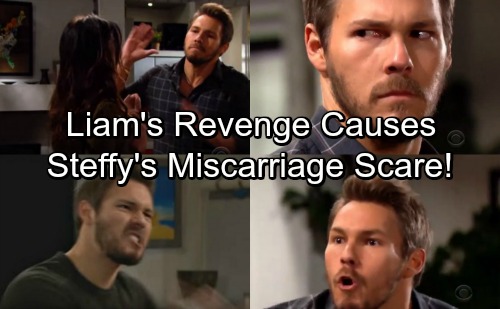 The Bold and the Beautiful (B&B) spoilers tease that Bill (Don Diamont) will once again consider a future with Steffy (Jacqueline MacInnes Wood). Now that Liam (Scott Clifton) has delivered the annulment papers, it removes one more obstacle for Bill. Steffy hooked up with him when she was feeling vulnerable. That same vulnerability could convince her to take Bill up on his next offer.

Things look pretty hopeless right now. Steffy doesn’t believe Liam will ever forgive her, so she might as well do what she wants. Likewise, Bill may think he has nothing to lose. He undoubtedly expects Liam to hold a grudge forever.

If Bill and Steffy get together for a while, that would really pour salt in Liam’s wound. He’s the kind of guy who softens over time, but this could get him riled all over again. Liam warned Bill that there would be consequences for his actions. If Bill keeps pursuing Steffy, that’ll only make Liam’s vengeful desires grow stronger.

The Bold and the Beautiful spoilers say Liam will sulk briefly, but he’ll eventually get his fire back. He’ll make some sneaky moves and take charge of his own life. Liam can’t sit around and wallow forever. He’ll be ready to make his father suffer, so Bill had better be prepared for anything.

How far will Liam go to get the vengeance he craves? Will his revenge come at a steep price? Liam’s plot against Bill could result in more pain for Steffy. She could be in great distress and that could spell trouble for the baby. It appears Steffy will have some complications down the road and Liam could be the reason why. He’ll feel terrible if he does anything that could harm their child.

Bill could also be in danger thanks to whatever Liam does. If Liam’s scheme somehow puts Bill’s life on the line, that could be another tactic to ease the tension. The thought of losing Bill forever could be a B&B game-changer. Liam may realize he’s turning into his monster of a father.

Perhaps Liam can learn to forgive and let those who have hurt him back in his life. Until then, Liam’s revenge plan is sure to cause serious drama. We’ll give you updates as other Bold and the Beautiful news comes in. Stay tuned to B&B and don’t forget to check CDL often for the latest Bold and the Beautiful spoilers, updates and news.