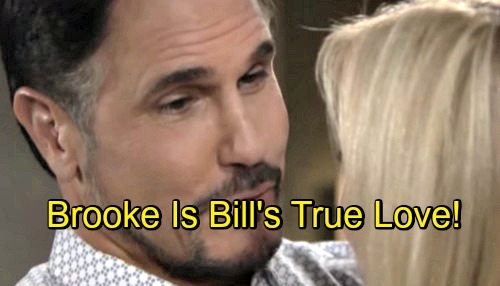 The Bold and the Beautiful (B&B) spoilers tease that Brooke (Katherine Kelly Lang) will throw even more of her support behind Bill (Don Diamont). She knows all about her ex’s terrible behavior, but she doesn’t think he deserves to lose his son. As Katie’s (Heather Tom) plan moves forward, Brooke will do whatever she can to keep Bill in Will’s (Finnegan George) life.

It’s true that Bill’s been distracted lately, but this custody threat probably would’ve been enough to spark changes. Bill seems determined to spend time with Will, so he’s outraged that Katie would try to keep them apart. In Bill’s defense, this solution doesn’t make much sense. Will’s disappointed because Bill hasn’t been around as much, so how will it help if his dad’s around even less?

Thorne (Ingo Rademacher) believes he can fill the void, but it won’t be the same for Will. Bill is his father and Thorne is Katie’s flavor of the month. You can bet Thorne and Katie won’t last, so that’ll just leave Will with more pain. If he bonds with Thorne like a dad, Will’s just going to end up devastated when he’s out of the picture. Katie should really think this through!

Perhaps Brooke will explain all this to her sister in an upcoming chat. She’ll inevitably speak up on behalf of Bill and try to make Katie see the light. Once Bill gets updates on Brooke’s support, he should be quite appreciative. Bill doesn’t typically have many people in his corner, so having Brooke on his side will mean a lot.

The Bold and the Beautiful spoilers hint that Brooke and Bill could start to reconnect. The timing’s right since Bill let Steffy (Jacqueline MacInnes Wood) go and is now single. Brooke and Ridge (Thorsten Kaye) have also been at odds over their daughters for months. They always manage to patch things up, but you can only add so many patches before a relationship unravels.

No matter which woman Bill wants, he always falls fast and hard. Maybe he’ll ultimately realize Brooke’s the one who got away. Bill may see that Brooke is his true love, not Steffy. Will The Bold and the Beautiful restore Brooke and Bill as a B&B power couple? “Brill” fans certainly hope so!

It sounds like some romantic shakeups are ahead on the CBS soap. We’ll keep you posted as other news comes in. Stay tuned to B&B and don’t forget to check CDL often for the latest Bold and the Beautiful spoilers, updates, and news.