The Bold and the Beautiful Spoilers: Brooke Shocks Her Family – Vigorously Defends Bill, Goes Against Katie in Custody Battle 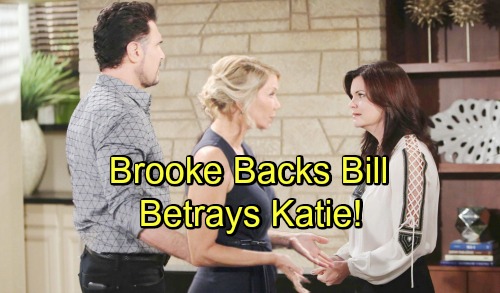 The Bold and the Beautiful spoilers tease that Brooke (Katherine Kelly Lang) will take an unpopular opinion within her family. Brooke was recently shocked to hear that Thorne (Ingo Rademacher) was nudging Katie (Heather Tom) to go after full legal custody of Will (Finnegan George). She and Ridge (Thorsten Kaye) even argued a bit about whether or not full custody was in Will’s best interest.

It seems that both Thorne and Ridge are staunchly in favor of Katie getting full custody and exerting more control over Will’s schedule and visits with Bill (Don Diamont). Neither of the Forrester men like Bill, and they think Bill is not an appropriate role model for Will. As far as they’re concerned, Will would be better off having nothing to do with Bill.

Ridge and Thorne’s big idea to get Katie to seek full custody will turn into a reality, when Katie finally decides that she’s had enough of Bill’s cancellations and excuses. B&B spoilers say that Katie will tell Bill that she’s going to file for full custody, and then all hell will break loose. Bill will let it be known that the war is on, and that she’s in for the fight of her life.

Of course, when a fight like this occurs, everyone picks sides. As for Thorne and Ridge, they’ll be on Katie’s side in the matter. But what about Brooke? Well, Brooke’s certainly not Bill’s biggest fan, but she won’t be as comfortable with the idea of Katie as sole custodian.

Brooke will feel that, despite being a very flawed human being, Bill has a right to be a part of his son’s life, and she’ll be vocal about that opinion. B&B spoilers say that Brooke will defend Bill’s right to be part of Will’s life to Ridge, Thorne, and Quinn (Rena Sofer).

Brooke may point out that Bill simply doesn’t know how to be a dad to a young son, but that he should be given the full opportunity to learn, rather than have his access to his son limited. She may also point out that a heated custody war certainly isn’t in the best interest of Will, and that it may make Will feel like he’s causing problems in everyone’s lives.

Do you think that anyone else in the Forrester family will see things the way Brooke does? Or will she be Bill’s only defender? Stay tuned to the CBS soap and don’t forget to check CDL often for the latest Bold and the Beautiful spoilers, updates, and news.