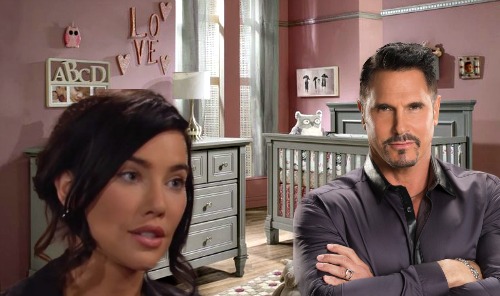 The Bold and the Beautiful (B&B) spoilers tease that Steffy (Jacqueline MacInnes Wood) will remain broken and disillusioned. She’s not sure real love’s in the cards for her, so she figures she might as well be with Bill (Don Diamont). They understand each other and at least Steffy knows he’s completely devoted to her.

Plus, Steffy and Bill still connect on some level. There’s an ease to being with a guy like him. Bill’s clearly a terrible person, so Steffy doesn’t have impossible standards to live up to. She feels like Liam asks too much of her, especially when he can’t even live up to those standards himself.

Nevertheless, Steffy will remain a bit guarded with her heart. Her recent deal was mainly about getting back at Liam and building a better future for Kelly. Steffy has feelings for Bill, but she’s not truly in love with him. She’s fine with this arrangement anyway, but Bill will hope for more.

The Bold and the Beautiful spoilers say Bill will try to show Steffy how much he cares. He’ll set up a grand gesture that’s sure to leave Steffy touched. Bill will shock Steffy with a brand-new nursery for Kelly. He’ll suggest that he’s all in on both Steffy and her precious daughter. Bill will promise that he’s going to put their family first, which will definitely appeal to his new fiancée.

Steffy will be overwhelmed with emotion and gratitude. B&B fans could see the first sign of growing love. Perhaps this “Still” romance will become something deeper for Steffy in the coming weeks. She may surprise herself by actually falling for Bill, but they have to take a big step first.

After Steffy sees the new nursery, Bill will suggest getting married right there in the living room. Steffy will be hesitant to jump in so quickly, but Bill won’t see any reason to wait. After all, they reached an agreement and he adores her. Bill will think that should be good enough to kick off their wonderful life together.