BY Heather Hughes on June 3, 2018 | Comments: one comment
Related : Soap Opera, Spoiler, Television, The Bold and the Beautiful 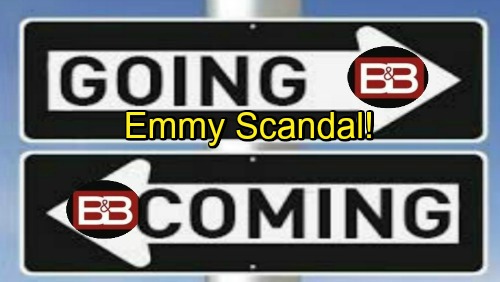 The Bold and the Beautiful (B&B) spoilers tease that there’s some comings and goings news to pass along. Let’s start with a new character who’ll bring some sizzle. Keith Carlos is a former wide receiver for the New York Giants as well as the Philadelphia Eagles. However, Carlos will trade football for bartending on the CBS soap. He’ll play Danny, who works at the Bikini Beach Club.

According to TV Insider, Carlos will pop up starting June 15. That also happens to be the day Courtney Hope returns as Sally, so be prepared for their paths to cross. Perhaps Sally will need to drown her sorrows after a brutal split! Thomas (Pierson Fode) has always been a real heartbreaker, so Sally may kick herself for trusting him again.

In addition to Danny’s scenes with Sally, he’ll appear on screen with Wyatt (Darin Brooks). It sounds like maybe Wyatt and Sally will run into each other at the bar. Will Wyatt throw back some booze, too? Could Sally and Wyatt commiserate over their problems? This could be a sign of a new potential pairing, so we’ll keep an eye on the situation.

As for Carlos, he’ll join the B&B cast on a recurring basis. The Bold and the Beautiful spoilers say Danny will appear in at least three episodes, but there’s always a chance he’ll show up in more. It just depends on how often a hot bartender is needed to pour a few and lend an ear!

In other news, one former B&B star faced a crushing blow. Patrika Darbo recently picked up a Daytime Emmy win for her work on The Bay, but it was later revoked. It turns out Darbo’s submission didn’t meet the requirements.

Unfortunately, the runner-up’s material didn’t follow the rules either! Jennifer Bassey also missed out on a Daytime Emmy this year, so the National Academy of Television Arts & Sciences (NATAS) just scrapped the whole thing. No one received an award for outstanding guest performer in a digital daytime drama series.

In defense of these stars, the rules were different for this category than some of the other digital acting categories. According to Variety, NATAS intends to make things clearer next time around. Darbo also revealed that she didn’t handle her own submission. The Bay’s executive producer, Gregori Martin, first made the mistake and NATAS didn’t catch it in time.

On Twitter, Darbo addressed the unfortunate chaos. “Didn’t do submission, so I am caught in middle of error by Producers and error by NATAS,” Darbo said. “Shouldn’t have happened to me or anyone.”