The Bold and the Beautiful Spoilers: Comings and Goings – Mysterious New Character – B&B Star Has a Reason to Celebrate 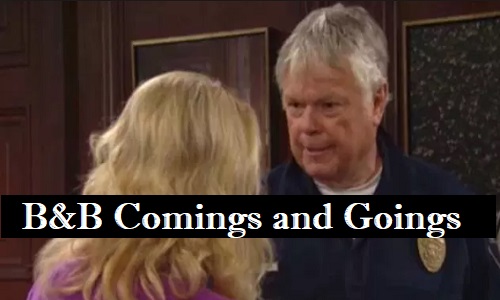 The Bold and the Beautiful (B&B) spoilers tease that we’ve got some comings and goings news to share. First, let’s talk about a familiar face. Dick Christie will be back on the scene as Charlie soon. He’ll return starting June 26, so B&B fans will want to tune in. As Forrester’s head of security, Charlie will be around to monitor a potential threat. He’ll get to work on a new case at FC this week.

Perhaps Maya (Karla Mosley) will want Charlie to keep an eye on Emma (Nia Sioux). She’s still suspicious of Ms. Barber the intern! Between the photo misunderstanding and her last name, Emma hasn’t given Maya or Hope (Annika Noelle) a real reason to trust her. She’ll work hard to win them over, but she’ll inevitably hit a few more snags.

Fortunately, The Bold and the Beautiful spoilers say Xander (Adain Bradley) will continue to back Emma up. Their romance will really start to take shape. We’ll see some serious fireworks by the time July 4 rolls around, so B&B should let love bloom this week in preparation for that.

Other Bold and the Beautiful spoilers state that Kyra Davis has joined the cast. The show’s staying tight-lipped on the story details and that’s probably to preserve a mystery. We do know that Davis’ character is named Zoe and she has a history with another character on canvas. Maybe she’s the reason Xander’s trying to leave his old life behind.

In other B&B news, Darin Brooks (Wyatt) has a reason to celebrate. He just had his five-year anniversary with The Bold and the Beautiful. That’s quite a milestone, so plenty of fans congratulated him on social media. Brooks’ wife, Kelly Kruger, chimed in as well. You may know Kruger from her occasional publicist popups on B&B or her role as Mac on The Young and the Restless.

Brooks is incredibly grateful for his run so far, but he shows no signs of slowing down. He tweeted, “It’s truly been an honor for me to even be on this show!! Thank you to #BradBell and everyone behind and in front of the camera! And especially YOU FANS!!! It’s been an amazing 5 years and hopefully to many MANY more! Let’s see where it goes from here!”

That’s it for comings and goings. We’ll give you updates as other B&B details emerge. Stick with the CBS soap and don’t forget to check CDL often for the latest Bold and the Beautiful spoilers, updates, and news.