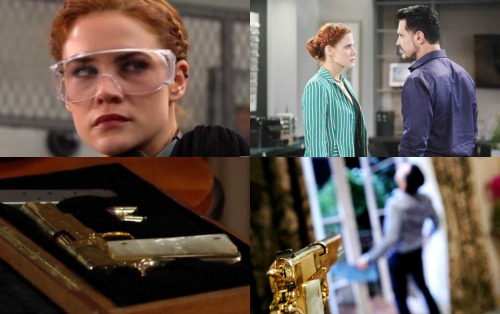 The Bold and the Beautiful spoilers tease that Sally’s (Courtney Hope) suspect odds appear to have sharpened due to the actor’s announced exit from B&B. The entire ensemble that portrays the Spectra Fashions crew and clan has received pink slips. So, does that mean Sally will soon be revealed as Bill’s (Don Diamont) shooter?

It wouldn’t seem to make sense. Knowing that she handled Bill’s golden gun, why would Sally have gone to his home on the night in question and worn gloves to shoot him in the back?

As viewers recall, Sally was shown at target practice with her Grams, Shirley (Patrika Darbo), and Saul (Alex Wyse). Darlita (Danube Hermosillo) has been conspicuous by her absence in recent weeks. We’ll address this character later.

Flashing back, Sally stormed into Bill’s office and had it out with him after he told her that he wasn’t going to help her rebuild Spectra. She saw the golden gun that he’d taken out of his office safe and placed on his desk, picked it up and shot it through a stunning cliffhanger. The next episode revealed that Sky had been hit, rather than Dollar Bill.

At that point savvy audience members, which represents all readers of this site, knew that foreshadowing occurred. Bill was going to be involved in some type of future gun play, but what would that be? Well, we all know now.

Let’s digitally skip to the night in question. Bill is at home pondering the legal papers that will cut Liam (Scott Clifton) and Wyatt (Darin Brooks) out of his life. He’s taking a drink when someone, who apparently had long hair, entered the Spencer compound, picked the gun up from a table, aimed and shot Bill in the back.

Wait, why was Darlita missing from the dinner that Sally, Shirley and Saul had at Il Giardino earlier? That was odd and also meant she could have been preparing to shoot Bill. Her motive would have been to defend her boss and friend, Sally.

Sally’s sister, Coco (Courtney Grosbeck), could also be revealed as the shooter. However, her only motive would have been in defense of her sister. Coco never seemed outraged, so that would be a plot stretch.

Grams could have pulled the trigger, as she’s made various verbal threats. But that outcome would seem a bit too much.

When merely considering all Spectra-related characters (who are exiting The Bold and the Beautiful), Sally appears to be the leading suspect. She had means, in having demonstrated how to handle a gun and having experience with the specific weapon in question. She had motive, based on Bill having ruined both her business and personal life. Thomas (Pierson Fode) was ripped from her arms and from Spectra due to the Caroline (Linsey Godfrey) lie. Sally also had opportunity, as scenes didn’t show her with others during the time Bill was shot.

This isn’t a hard theory, as Sally’s marksmanship would have more likely aimed for a shot north of Bill’s back. But this conjecture is at least debatable based on Courtney Hope’s announced exit from the cast, meaning that her character, Sally, will soon be departing Los Angeles for a reason. Could that mean her imprisonment for attempting to kill Bill?