The Bold and the Beautiful Spoilers: Desperate Bill Pleads With Liam & Wyatt – Begs For Sons’ Support In Custody Case 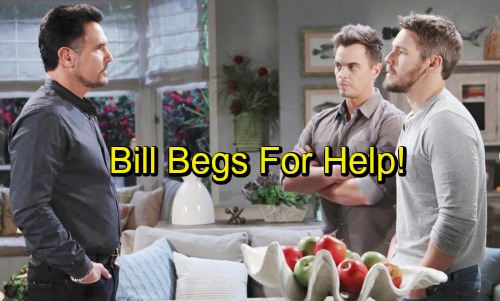 The Bold and the Beautiful spoilers tease that Bill (Don Diamont) will need to round up all the support he can get for his upcoming custody battle with Katie (Heather Tom). Bill’s operating from a position of weakness in the case now that Katie and Thorne (Ingo Rademacher) are getting married before the hearing. “Thatie” will be able to present themselves and their home as the more stable, loving environment for Will (Finnegan George).

Thatie will also have all of Bill’s recent misdeeds to lay before the judge. Not only has Bill been missing from his youngest son’s life for the past few months, he seriously messed with his adult sons’ lives in some of the worst ways possible. The way he used Wyatt (Darin Brooks) to keep Liam (Scott Clifton) and Steffy (Jaqueline MacInnes Wood) apart will probably make Judge McMullen (Joe Lando) cringe, and Bill knows it.

Right now, Bill’s only got Brooke (Katherine Kelly Lang) on his side, and there’s only so much she can do to help his case. Sure, she can testify on his behalf, but her opinion will only go so far. What Bill really needs is the testimony of both of his adult sons to be in his favor. And therein lies the problem.

Liam has been subpoenaed to testify on Katie’s behalf in the case. Clearly, Katie thinks that if the judge hears about why Liam cut Bill out of his life, it will help her case, and she’s right. Wyatt has been subpoenaed to testify on Bill’s behalf, but Wyatt could still reveal all of the crappy things that Bill did to him while under oath. Bill knows that both of their testimonies could help seal the deal for Katie.

So, Bill will make a last-ditch effort to reach out to Liam and Wyatt. B&B spoilers say that he’ll approach his sons and try to get both of them on his side. It’s really his last hope, so he’ll probably make a good pitch. He’ll likely express remorse for what he’s done in the past and assure Liam and Wyatt that his priorities are back on track.

Knowing Bill, he’ll probably include an emotional plea as well, suggesting that he doesn’t want Will to grow up not knowing his father the way that Liam and Wyatt did. But will Bill’s attempt to tug at their heartstrings work?

Whether either Liam or Wyatt are moved by their father’s words remain to be seen. Do you think Bill will succeed in persuading them to help him out? Stay tuned to the CBS soap and don’t forget to check CDL often for the latest Bold and the Beautiful spoilers, updates, and news.