BY Heather Hughes on June 19, 2018 | Comments: one comment
Related : Soap Opera, Spoiler, Television, The Bold and the Beautiful 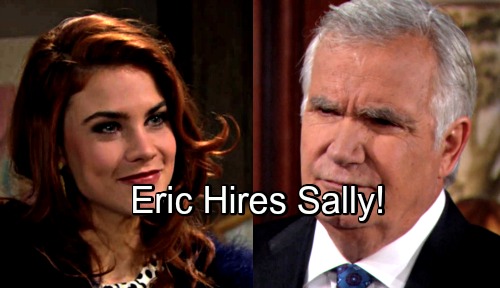 The Bold and the Beautiful (B&B) spoilers tease that Sally (Courtney Hope) will try to find her footing again. She knows her way around the fashion world, but rebooting Spectra has proven difficult. That’s mostly due to Bill’s (Don Diamont) constant manipulation. His skyscraper obsession put Sally at a disadvantage every step of the way.

Of course, that led to Sally sabotaging herself a bit. B&B fans will recall when she stole Forrester designs out of desperation. That’ll be a big part of the plot moving forward. The Bold and the Beautiful certainly has a surprising path in mind for Sally.

Sally’s tired of trying to start from the ground up. Furthermore, she doesn’t have any rich hotties funding her ventures now. Sally has tried to be a real fashion leader, but life has thrown her curveball after curveball. She’s ready to settle down and be a team player, which brings us to an intriguing job offer.

The Bold and the Beautiful spoilers say Eric (John McCook) will take pity on Sally and deliver an exciting proposal. He’ll ask if Sally’s willing to come on board at Forrester Creations. Sally will likely be stunned by the news. Again, this is the same family she stole from! Sally should be surprised that Eric’s willing to forgive and let her join the Forresters’ mission for fashion domination.

Wyatt may have a little something to do with Eric’s offer. He could easily put in a good word for scrappy Sally. She’s got some great qualities that would make her a beneficial employee. Sally is a hard-worker and she never gives up. She may take time to regroup when she’s dealt a blow, but she always dusts herself off and figures something out eventually.

Plus, Eric tends to love second chances. He gave Quinn (Rena Sofer) one after her kisses with Ridge (Thorsten Kaye) came to light. Eric was also pleased to see Brooke (Katherine Kelly Lang) give Ridge another shot. He even urged Liam (Scott Clifton) to reunited with cheating Steffy (Jacqueline MacInnes Wood).

As long as someone’s remorseful, Eric can get past a lot. That’ll be the case with Sally soon enough. During the week of June 25-29, Eric will tell Sally a position’s up for grabs. It’ll be hers if she wants it, which we’re assuming she will!

Naturally, this will cause some chaos at the company. Steffy, Ridge and even Hope (Annika Noelle) should be wary. However, Sally will do whatever she can to earn their trust. With any luck, she can become a valuable staff member and bring some fantastic ideas to the table.

B&B viewers won’t want to miss all the drama. We’ll give you updates as other details emerge. Stick with the CBS soap and don’t forget to check CDL often for the latest Bold and the Beautiful spoilers, updates, and news.