The Bold and the Beautiful Spoilers: Wyatt and Sally, Like The New Avengers – Cute Couple Seeking Justice

BY Sean O'Brien on June 19, 2018 | Comments: one comment
Related : Soap Opera, Spoiler, Television, The Bold and the Beautiful 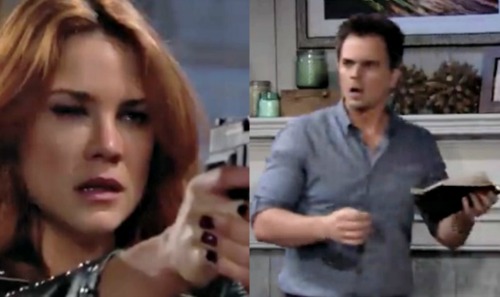 The Bold and the Beautiful spoilers tease that Wyatt (Darin Brooks) and Sally (Courtney Hope) have cast off their so-called loves and are now into each other. However, Wally’s quickie pairing begs a question. How deeply did each character supposedly care about their past romantic partners?

Obviously, Wyatt and Sally were attracted to each other. Most fans, readers of this superb site, and this scribe haven’t locked lips with someone they found visually reprehensible in the past. Instead, smooching happened because the other face was appealing. Such is the truth between the sexy redhead and B&B’s edition of Johnny Depp.

In the old days, meaning before the internet systematically took hold of all users impulses, a romantic encounter could begin with a light switch dimmer being physically pushed downward, a Barry White vinyl being applied to the record player, and a plenty of hair being swooped away from each person’s faces before the first kiss. Oh, a spritz of breath freshener was also part of the routine. The bottle was strategically placed aside of the stereo system as not to be noticed by said invited guest.

Today, a voice-activated commands handles the lighting and tune selection. Depending upon style, or hair status in general, there might be nothing to swoop before smooching. The breath issue would also be handled prior to said desirable arriving, as maturity has allowed some evolution in this process.

Wyatt is lonely. Katie (Heather Tom) basically dumped Wyatt, to which he agreed. She then began smooching with Thorne (Ingo Rademacher) within the next scene. Katie really liked the breath spray he applied.

Sally is lonely. Thomas (Pierson Fode) left her for Caroline (Linsey Godfrey), who went along with her uncle’s outrageous scheme. But she later told the truth to Thomas, who then recommitted to Sally. Thomas reversed himself months later and went back to Caroline and their son, thus leaving Sally alone.

In between what was noted in the above paragraph, Sally had a crush on Liam (Scott Clifton) and Lally was almost crushed to death under the Spectra Fashions building. But that was a long time ago and Liam has since had baby Kelly with Steffy (Jacqueline MacInnes Wood) and is going to fully revive Steam.

Brooks’ character was almost killed by Sally in his house. Yes, Miss Spectra again aimed her gun at a Spencer man. She also again aimed purposely to the left. This time hitting a framed photo of Bill.

Only in soap land would romance later follow and it did. Wyatt and Sally share a spark and a common desire to get Bill. So this cute couple could prove to be quite good. CDL is a leading source for everything linked to The Bold and the Beautiful. Check back regularly for B&B spoilers and news!