BY Heather Hughes on January 24, 2018 | Comments: one comment
Related : Soap Opera, Spoiler, Television, The Bold and the Beautiful 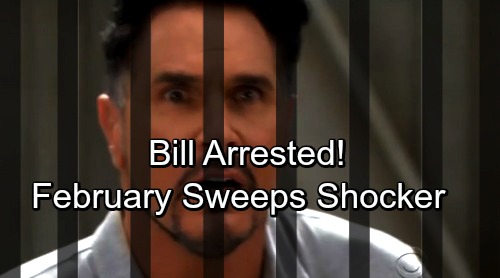 The Bold and the Beautiful (B&B) spoilers tease that Bill (Don Diamont) will revert to his previous strategy. After Steffy (Jacqueline MacInnes Wood) chose Liam (Scott Clifton), Bill ultimately agreed to back off and support her marriage. Things quickly feel apart, but Bill hoped to put Liam and Steffy’s marriage back together – at least that’s what he claimed!

Deep down, part of Bill must be happy that Liam won’t budge. He still has strong feelings for Steffy, so he’ll feel like this could give him another chance. The Bold and the Beautiful spoilers say Bill will deliver a passionate plea. He’ll assure Steffy that he can be the man of her dreams. Bill will vow to always support Steffy and her child. He’ll think she should put Liam in the rearview mirror and move on.

Despite how gloomy the situation with Liam looks, Steffy may not be willing to accept Bill’s offer. However, the fact that Bill’s even making this heartfelt speech spells trouble. If the news gets back to Liam, he’ll be furious. The same goes for Ridge (Thorsten Kaye). They may disagree about Steffy’s culpability, but they both think Bill is scum who deserves to pay.

The Bold and the Beautiful spoilers suggest that a plan will form soon. Since Bill can’t seem to shake his Steffy obsession, that could feed Ridge and Liam’s desire for revenge. They’ll want to bring Bill down in a big way. B&B fans can expect some tough moments for Bill during February sweeps. He’s about to suffer greatly for all his crimes and mistakes.

During Ridge’s last confrontation with Bill, he vowed to have charges brought against him. Perhaps Ridge will actually follow through on that promise. Steffy and Bill’s sexual encounter was consensual, but there are plenty of other crimes Bill could pay for. The Spectra fire might be a good place to start.

Liam once recorded Bill’s confession, but his dad deleted all the copies – or did he? Could Liam still have a secret one stashed somewhere? He might’ve forgotten about it in the midst of all the baby drama. Regardless, Ridge and Liam may be able to make this happen. They’re determined to put Bill behind bars and they just might achieve their goal.