BY Heather Hughes on January 26, 2018 | Comments: one comment
Related : Soap Opera, Spoiler, Television, The Bold and the Beautiful 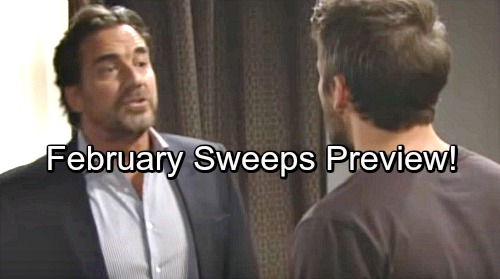 The Bold and the Beautiful (B&B) spoilers tease that February sweeps will bring some shockers. There’s plenty of drama ahead and B&B fans won’t want to miss it. We’ve got a preview of what’s to come during this exciting time of year.

However, it looks like Thorne’s plan will ultimately fail. B&B buzz suggests that Ridge and Brooke will officially tie the knot. They’re most likely going to be the show’s most solid couple for a while. That’s especially true since Carter’s (Lawrence Saint-Victor) sniffing around Maya (Karla Mosley). Look for him to create major issues for Maya and Rick (Jacob Young).

While Maya faces temptation, Bill (Don Diamont) will deal with more backlash. He’ll begin to wonder if it’s ever going to let up. Of course, the rage for Bill will only intensify. The Bold and the Beautiful spoilers say old grudges will be reignited and new ones will form as well.

Liam (Scott Clifton) and Ridge will have revenge on their minds, but don’t overlook other threats. B&B spoilers state that Maya still has some grievances to air. She could become quite a thorn in Bill’s side. Additional characters will get in on Bill’s takedown as this hot plot revs up. He really needs to watch his back.

As for Liam’s love life, he’s certainly got options. Steffy (Jacqueline MacInnes Wood) will shift to the side for a bit while Hope (Annika Noelle) and Sally (Courtney Hope) compete for Liam’s attention. Liam may revisit the idea of forgiveness eventually, but Steffy will have to suffer for now.

Other Bold and the Beautiful spoilers say Wyatt (Darin Brooks) and Katie (Heather Tom) will get even closer. They’ll have to make a big decision sooner or later. Katie and Wyatt are having tons of fun, but is that enough to sustain their romance? At some point, one of them’s bound to want more. They’ll have to determine if they’re on the same page about that.

Thorne’s growing interest in Katie could make things a little tougher for Wyatt. Love’s always going to be complicated on B&B! We’ll give you updates as other news comes in. Stay tuned to the CBS soap and don’t forget to check CDL often for the latest Bold and the Beautiful spoilers, updates and news.