The Bold and the Beautiful Spoilers: Friday, October 5 – Brooke Chats Up The Judge – Ridge Scoffs At Bill’s Request For A Favor 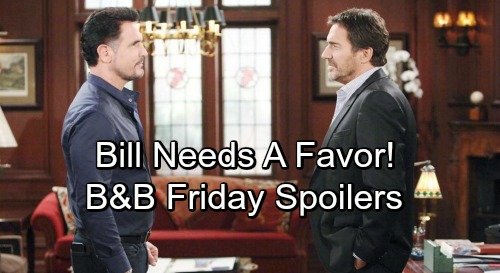 The Bold and the Beautiful spoilers for Friday, October 5, tease that Brooke (Katherine Kelly Lang) will reel from the revelation that Ridge (Thorsten Kaye) secretly influenced Judge McMullen (Joe Lando) in Bill (Don Diamont) and Katie’s (Heather Tom) custody case. She’s just overheard Ridge leaving a voice message for the judge thanking him for “doing the right thing” with respect to his ruling and she was shocked.

Brooke also saw that Ridge had a secret mobile phone that he had used to contact the judge. On Friday’s episode, Brooke will find evidence that Ridge influenced the judge. Chances are, she’s going to find the text messages that Ridge sent to pressure Judge McMullen to rule in favor of Katie. Still, it won’t be concrete proof of judge tampering, so she’ll want to do a little more investigating.

Katie will pay Judge McMullen a visit and will probably use the opportunity to dig into the relationship between Ridge and the judge. Brooke certainly didn’t appear to know or recognize the judge, and she’s not privy to the fact that Ridge and the judge go way back. We’ll see what she uncovers during their conversation, which B&B spoilers say will be a bit sneaky on Brooke’s part.

Meanwhile, on the new B&B episode on Friday, October 5, Bill will ask Ridge and Brooke for a substantial favor. It may have something to do with Will (Finnegan George). Now that Bill’s access to Will is going to be limited, Bill may ask Ridge and Brooke to look out for Will. Or perhaps Bill will want to make sure that nobody goes badmouthing him to Will his absence.

Whatever the nature of the favor is, it seems that Ridge will react smugly to Bill’s request. Ridge is feeing particularly triumphant right now, and he won’t respond graciously to Bill at all. In fact, he’ll probably just rub Bill’s nose in the fact that he lost the custody case, and he’ll likely reiterate just how horrible of a father Bill has been. But Ridge had better be careful, since Brooke is on the verge of finding out that Ridge illegally influenced the judge!