The Bold and the Beautiful Spoilers: Liam’s World Falls Apart – Hope Conflict and Baby Shockers Push Him Back Toward Steffy 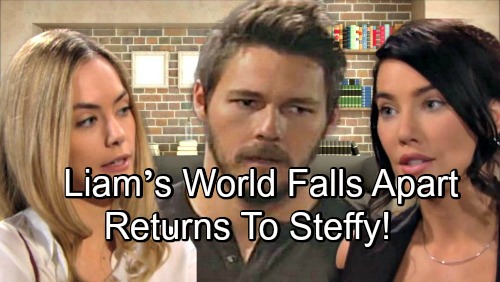 The Bold and the Beautiful (B&B) spoilers tease that things are looking up for Liam (Scott Clifton). He was on a difficult path for a while thanks to Steffy (Jacqueline MacInnes Wood), Bill (Don Diamont) and even himself. After Steffy betrayed Liam in the worst way possible, he hit the roof. Liam wasn’t sure he could ever get past Steffy and Bill sleeping together.

Of course, B&B fans knew Liam would forgive Steffy eventually. He was ready to give their relationship another shot until Bill intervened. That led to Hope’s (Annika Noelle) pregnancy, which strengthened the “Lope” connection as well. The love triangle turned into a real mess and ultimately pushed Steffy to move on.

Now that Liam’s accepted Steffy’s decision, he’s ready for a bright future with Hope and their baby. Liam will try to rebuild his bond with Bill and be a good co-parent with Steffy. Despite Hope and Steffy’s issues at Forrester Creations, “Lope’s” marriage will grow stronger, too. Liam should feel like everything’s finally settling down and coming together.

Alas, that’s exactly when a B&B character should worry. The moment everything’s going great is really the moment before everything falls apart! The Bold and the Beautiful spoilers say some unexpected obstacles will inevitably hit. Since Hope had that medical scare early on, we’re bound to see another one sooner or later. There’s no way the remainder of her pregnancy will be free of drama.

Hope and Steffy’s war could eventually take a toll, too. If things get nastier, we could see some cutthroat tactics and awful consequences. There’s even a chance Steffy will inadvertently cause Hope’s miscarriage. If she sparks a fall or just a stressful confrontation, it could end in tragedy.

That could become a real source of conflict for Hope and Liam. Perhaps Liam would view it as an accident and nothing more. He’d realize that Steffy would never intentionally harm his baby or anyone else’s. Hope, on the other hand, might blame her dangerous rival. This could be the beginning of the end for the “Lope” romance.

The Bold and the Beautiful spoilers hint that Liam and Steffy aren’t quite done with each other. Their reunion should happen at some point, so B&B will need a plan to kick that in gear. Will we see any signs of it soon? We’ll give you updates as other news comes in. Stay tuned to the CBS soap and don’t forget to check CDL often for the latest Bold and the Beautiful spoilers, updates and news.