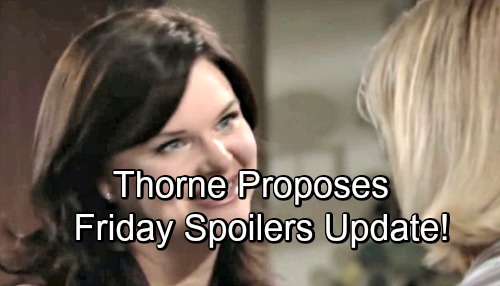 The Bold and the Beautiful (B&B) spoilers for Friday, September 14, tease that Brooke (Katherine Kelly Lang) and Katie (Heather Tom) will disagree about what’s best for Will (Finnegan George). Bill (Don Diamont) pushed Brooke to pay Katie a visit and get her to drop the custody case. Brooke just gave it a shot, but Katie will put up a fight soon enough. These sisters just won’t be on the same page.

Katie will argue that Bill had his chance, but he blew it. She won’t allow Will to face constant disappointment. Of course, Brooke will contend that Bill’s ready to make an effort. She’ll think Bill deserves a another shot at being there for his boy, but Katie won’t think it would matter. When it comes to Bill, Katie always expects more of the same neglect and selfishness.

The Bold and the Beautiful say Katie will urge Brooke to be honest. She’ll remind her sis of how many times Bill has promised to change. Katie will feel like Brooke should know better than anyone that Bill’s incapable of it. She’ll wonder if Brooke truly believes things will ever be any different. Brooke will likely reiterate her support for Bill as promised. However, she may start to see Katie’s point.

Nevertheless, Brooke will remain in Bill’s corner next week. For now, Bill will warn that things are going to get messy if this war keeps up. He may be prepared to play dirty if need be. Later, Thorne (Ingo Rademacher) will offer Katie an engagement ring and ask her to marry him. The proposal should come as quite a shock, but she’ll accept before long.

Over with Steffy (Jacqueline MacInnes Wood), she’ll ask her dad an important question. B&B fans know Ridge is backing up Katie and Thorne in the custody battle. Steffy will try to figure out Ridge’s true motives. She’ll suspect that this is more about sticking it to Bill than protecting his son.

Steffy’s probably right, but will Ridge admit it? Regardless, The Bold and the Beautiful spoilers say Ridge won’t back down. He’ll insist that Bill needs to pay the price for his mistakes and stay out of Will’s life. We’ll give you updates as other B&B news comes in. Stick with the CBS soap and don’t forget to check CDL often for the latest Bold and the Beautiful spoilers, updates, and news.