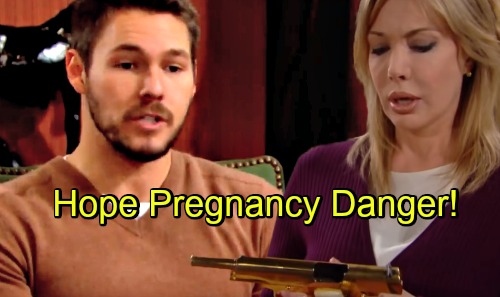 The Bold and the Beautiful (B&B) spoilers tease that Bill (Don Diamont) will get a visit from his worried son. Liam (Scott Clifton) will decide he needs to have a chat with his father and express his concern regarding Taylor’s (Hunter Tylo) mental state. It’s clear that she’s not doing well at all.

After a string of disturbing outbursts, Liam will be truly rattled about what the future holds. He’ll have a bad feeling about where things could go from here. Liam will bring Bill up to speed and wonder what his dad thinks about all this. He’ll try to get another perspective on Taylor and her apparent downward spiral.

Bill will admit that Taylor’s been highly agitated, but he’ll hope Steffy (Jacqueline MacInnes Wood) can get a grip on her. He’ll mention his guilt over what drove Taylor to shoot him and suggest that he understands on some level. However, what Liam says next will catch Bill off guard.

The Bold and the Beautiful spoilers say Liam will bring up the safety of his children. He’ll confess that he had a disagreement with Steffy about this. Liam doesn’t want Taylor around Kelly and he believes he has some solid reasons for that. He certainly wouldn’t want Taylor to put his daughter in danger.

Liam will fear for his unborn child, too. He can tell that Taylor has a tendency to take things too far, so he’ll assume Hope (Annika Noelle) and the baby are in real peril. B&B spoilers say Bill will scoff at that. He’ll feel like Liam’s overreacting and argue that Taylor was just stepping up for Steffy.

Bill ruined Liam and Steffy’s chance at happiness, so he’ll get why she was outraged and exhibiting extreme behavior. He’ll assure Liam that Taylor wouldn’t do anything to harm his kids. It’s one thing to pump a bullet in an enemy. It’s quite another to let innocent babies get hurt.

Nevertheless, Liam won’t think Taylor can be trusted right now. Even if she wouldn’t intentionally harm the little ones, Taylor could still put their lives in jeopardy. Again, The Bold and the Beautiful spoilers say Liam will have a very bad feeling about Taylor’s presence in town. It seems like a horrible B&B omen!

Will Taylor accidentally cause a pregnancy disaster for Hope? Will Liam and Hope’s baby survive whatever’s in store? We’ll give you updates as other B&B news comes in. Stay tuned to the CBS soap and don’t forget to check CDL often for the latest Bold and the Beautiful spoilers, updates and news.