The Bold and the Beautiful Spoilers: Hope Caught in Emma and Zoe’s Feud – Leads to Accidental Baby Danger? 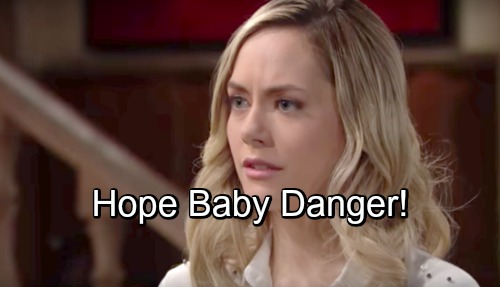 The Bold and the Beautiful (B&B) spoilers tease that Hope (Annika Noelle) could find herself stuck in a mess. After Ridge (Thorsten Kaye) picked Steffy’s line, it led to plenty of conflict with Hope. She wasn’t happy about Hope for the Future being scaled back, but she seems to have made peace with it.

Hope and Steffy aren’t as chummy as before Ridge’s decision, but they’re on decent terms now. It appears they’re mostly avoiding each other and staying civil when they do cross paths. There’ll inevitably be more hostility down the road, but B&B may have something different in mind first.

That brings us to the mess we mentioned. The Bold and the Beautiful spoilers say Hope may get involved in Emma’s (Nia Sioux) love life. As Xander (Adain Bradley) and Zoe’s (Kiara Barnes) flirting revs up, Emma will be jealous, angry and heartbroken. She may confide in Hope, who’ll pick up on Zoe and Xander’s connection, too.

Offering advice on this situation could be tricky for Hope. She was sort of in Zoe’s position not too long ago. Hope was pining for Liam (Scott Clifton) and finding ways to get closer to him. Steffy eventually realized they couldn’t stay away from each other and bowed out, so Hope scored a future with Liam.

Of course, Hope may not portray herself as the one at fault. She could simply argue that sometimes exes have an unbreakable bond. Hope may urge Emma to keep that in mind. Then again, Hope could ignore her own path to Liam and suggest that Emma should fight for what she wants. Since Hope never gave up on Liam, she may think Emma should hold out hope for a future with Xander.

Regardless, Hope could be inserting herself in something she shouldn’t be part of. Meddling could have disastrous consequences in this case. Zoe has certainly shown a few shades of crazy since she showed up. Emma seemingly has the potential to ride the crazy train, too.

If Hope gets caught in Emma and Zoe’s feud, it could lead to some inadvertent danger. Could Hope’s baby end up at risk? It’d be an interesting way to tie these stories together and avoid another Steffy mishap. The Bold and the Beautiful tends to have Steffy cause accidents, but they may want to break the curse!

No matter how things play out for Hope, more baby drama must be in store. We’ll give you updates as other B&B news comes in. Stay tuned to the CBS soap and don’t forget to check CDL often for the latest Bold and the Beautiful spoilers, updates, and news.