BY Sean O'Brien on August 19, 2018 | Comments: one comment
Related : Soap Opera, Spoiler, Television, The Bold and the Beautiful 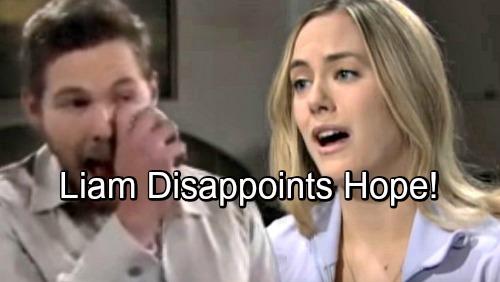 The Bold and the Beautiful spoilers tease Hope’s (Annika Noelle) intentions in marrying Liam (Scott Clifton) may not secure their family. Kelly’s existence and Steffy’s (Jacqueline MacInnes Wood) unresolved feelings mean that Steam is not truly gone, among other undermining factors.

Liam is trying to balance the love two women have for him, the children he has with both of them, their mothers, and reverberations from Bill’s (Don Diamont) finally admitted destructive attacks.

All noted in the above paragraph is what Hope has signed on for. Her pure love for Liam and the potential for Lope’s child to have a traditional family life do make her efforts commendable and possibly, achievable. Though viewers know that in the soapy world the chances of Hope and Liam living happily ever after are remote.

At present, Steffy is sincere. She literally gave her engagement ring to Hope and told Liam to marry her. That was deeply selfless.

Liam’s indecisiveness forced Steffy to change course. She committed the moral crime of sleeping with his father, but had re-earned Liam’s trust this summer. But Bill’s final, deceptive act created another uproar for Steam. The couple didn’t survive it and Steffy decided to move on.

Hope seems to believe that she’s going to be the perfect positive influence on Liam. Translation, she’s going to fix him. That heartfelt theory has been held by countless brides and grooms across history.

Yes, Liam may be able to achieve greater stability with Hope because she’s not Steffy. The longtime rivals do have vastly different personality types, which then create varying circumstances for those within their auras.

However, Hope’s softer side could lead to her enabling Liam in a different way than Steffy did, rather than helping him learn how to address his flaws. Mix in the ongoing drama that will extended well beyond Taylor (Hunter Tylo) and Brooke’s (Katherine Kelly Lang) cake fight and Hope and Steffy may be provoked into renewing their own battle over Liam.

Each of the names mentioned above will influence Liam’s actions. Currently, he doesn’t possess enough strength to take charge of his family and sideline others when need be.

Hopefully, for Kelly and Lope’s newborn-to-come, Liam develops a much greater ability to control his own destiny. The women in his life needed to tell him what to do because of his character deficit. Bill was able to manipulate Liam because he wasn’t tough enough to fight his dad off.

Hope will need to fight for her hard-earned family. But Liam will also need to step up in Los Angeles as well.