The Bold and the Beautiful Spoilers Next 2 Weeks: Bill and Thorne’s Vicious Battle – Steffy Finds a Distraction from ‘Lope’ Pain

BY Heather Hughes on August 19, 2018 | Comments: one comment
Related : Soap Opera, Spoiler, Television, The Bold and the Beautiful 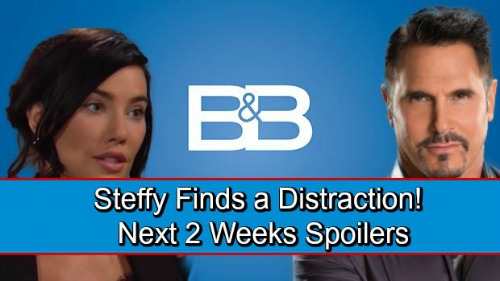 The Bold and the Beautiful (B&B) spoilers for the next two weeks tease that we’ll see some big developments. During the week of August 20-24, Liam (Scott Clifton) and Hope (Annika Noelle) will prepare for their nuptials. Before Liam exchanges vows with his bride, Taylor (Hunter Tylo) will rush over to the cabin and make a passionate speech. She’ll beg Liam to halt his wedding plans immediately.

Taylor won’t want to see Steffy (Jacqueline MacInnes Wood) go through this nightmare, but Liam will insist on sticking with Hope. The Bold and the Beautiful spoilers say Hope and Liam will indeed marry later. Despite a few hiccups along the way, they’ll feel at peace when they’re announce husband and wife. Alas, that peace won’t last. Their wedding reception will be a total disaster!

Of course, Brooke (Katherine Kelly Lang) and Taylor will be to blame. B&B fans can expect Brooke to hear about Taylor’s earlier stunt. She won’t appreciate her enemy’s decision to meddle, so she’ll really let Taylor have it. After Taylor fires back, they’ll have a heated showdown – complete with tossed wedding cake.

Meanwhile, Bill (Don Diamont) will have to choose between a significant business meeting and picking up his son. Will (Finnegan George) means a lot to Bill, but that doesn’t mean this terrible father will put him first. Bill will focus on work and miss their playdate, so Katie (Heather Tom) should be discouraged.

Thorne (Ingo Rademacher) will think it’s time for Katie to seek full custody and essentially cut Bill out of Will’s life. That’ll be a tough decision for Katie. It’s one she certainly won’t take lightly. The Bold and the Beautiful spoilers say conflict will erupt during the week of August 27-31. When Bill finds out Thorne’s been planting ideas in Katie’s head, he’ll hit the roof.

Bill will wonder who Thorne thinks he is. He’ll refuse to let a Forrester worm his way in Will’s life and start raising him as his own. Bill will make sure Thorne knows that the war is on. It sounds like we’ve got a new B&B rivalry on our hands.

Other Bold and the Beautiful spoilers state that Steffy will throw herself back into work. That’s probably for the best since Liam and Hope will be growing closer. Steffy will concentrate on her new bedroom line, which has a sneak peek coming up. She’ll feel great about what she’s accomplished, so that should be a bright spot in her life right now.

Finally, Zoe’s (Kiara Barnes) manipulation will continue. She came to town on a mission to get Xander (Adain Bradley) back and it seems to be paying off. The Bold and the Beautiful spoilers say Zoe will lock lips with Xander to show her gratitude. She’ll be glad he defended her after she was hired at Forrester Creations.

Zoe has no intention of heading back to England anytime soon, so Emma (Nia Sioux) had better start scheming. She needs to fight fire with fire! We’ll give you updates as other B&B news comes in. Stay tuned to the CBS soap and don’t forget to check CDL often for the latest Bold and the Beautiful spoilers, updates and news.