BY Sean O'Brien on December 4, 2017 | Comments: one comment
Related : Soap Opera, Spoiler, Television, The Bold and the Beautiful 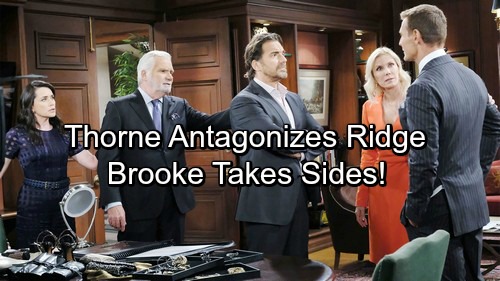 The Bold and the Beautiful spoilers tease that Brooke (Katherine Kelly Lang) and Thorne (Ingo Rademacher) will grow increasingly close now that their living together. This pair isn’t actually co-habitating, but Ridge (Thorsten Kaye) won’t see it that way.

Sibling rivalry was instantly renewed when Thorne returned to Los Angeles. Ridge recognized that his so-called little brother was a threat and he’ll be proven right in time.

Ridge was recently involved with Quinn (Rena Sofer), but that dalliance went nowhere. That pairing was more flirtatious affection, rather than a precursor to an affair. Eric (John McCook) didn’t initially see it that way, became understandably enraged, left the mansion and temporarily moved into a hotel room. Sheila (Kimberlin Brown), who just happened to be living in the room aside of him (soap), took advantage of Eric’s disillusionment until he and Quinn straightened her out.

Kissing Quinn originally caused trouble between Ridge and Brooke, while they were engaged to be remarried. Brooke’s eventual realization of that connection served to push her into Bill’s (Don Diamont) arms. She then married him instead of Ridge.

Brooke’s marriage to Bill didn’t last long as B&B devotees know. Bill’s admission about punching Liam (Scott Clifton) and green-lighting the torching of the building that Spectra Fashions occupied proved to be two steps over the line. Brooke left Bill in a huff and wasn’t open to a reconciliation. They’re over, which gave Ridge hope that he could convince Brooke to take him back.

Thorne and Brooke bonded after he’d returned from Paris, which followed the death of his daughter Aly (Ashlyn Pearce). Building off reopened grudges, he asked Brooke to tell him what Ridge had done to earn her distrust. But she wouldn’t answer him. 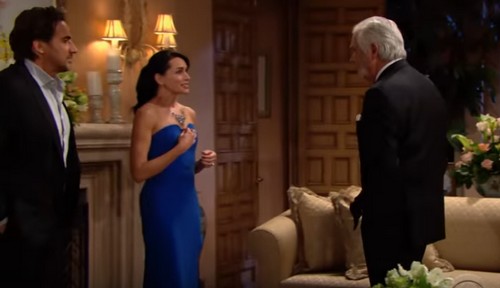 After he learns about the Quinn situation, Thorne will use that information to push Ridge’s buttons. Kaye’s character’s series of reactions will reinforce Brooke’s feelings of betrayal due to the past subject matter and Ridge’s current behavior.

Ridge will end up looking bad in a different way as well. He’ll come across as the lesser man when he battles his brother in front of Brooke on multiple occasions. Thorne’s goal won’t be to make himself look like the better romantic option, but that will be the result.

Brooke will serve as Thorne’s sounding board and defender moving forward, which will naturally allow them to grow closer. Ridge will follow his old personality patterns and likely lose yet another opportunity to remarry the woman he loves.