The Bold and the Beautiful Spoilers: Thorne Pushes Katie To Seek Full Custody of Will – Bill Fights Back, Nasty Custody War Is On

BY hellodrdavis on August 16, 2018 | Comments: 3 comments
Related : Soap Opera, Spoiler, Television, The Bold and the Beautiful 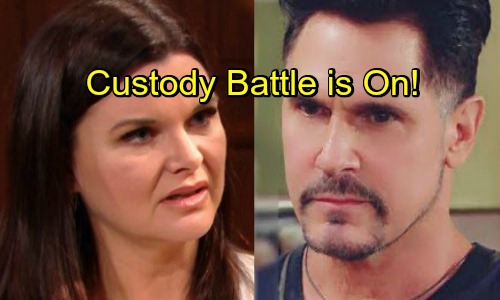 The Bold and the Beautiful spoilers tease that Katie (Heather Tom) will have a lot on her mind where Will (Finnegan George) is concerned. Katie’s recent focus has been on getting Bill (Don Diamont) back into her son’s life, but that’s been a struggle. Bill has been absent from Will’s life for months, and Katie’s finding that it’s not so easy for Bill to come back into the picture and reclaim his role as dad.

Will outright rejected Bill and demanded to be returned to his mom during what was supposed to be an overnight stay at Bill’s mansion. And more trouble is looming. B&B spoilers say that Bill will find himself in a difficult position when an important business meeting arises at the same time he’s supposed to pick Will up. It seems that Bill will have nothing but difficulties in trying to be a father to Will.

At the same time, Thorne (Ingo Rademacher) has made fatherly inroads with Will. The simple fact is that Thorne’s been there when Bill hasn’t been. And B&B spoilers say that Thorne will start putting pressure on Katie to make a custody decision regarding Will.

Bill and Katie currently have joint custody, but Bill hasn’t been living up to his end of the agreement. Bill’s provided financial support, but he hasn’t been there physically and emotionally for his son.

Thorne will want Katie to think about seeking full custody of Will. He’ll even pledge to Katie that he’ll step up to be a father-figure in Will’s life if Bill doesn’t do so. Katie’s basically been fulfilling the role of full-custody parent for a while now, so Thorne will probably think that it’s only right for Katie to have legal full custody.

Katie will consider Thorne’s suggestion, but she’ll fret about it, and it’s easy to understand why. She’d likely have a good case against the perpetually absent Bill. But Bill isn’t going to just sit by and watch Thorne take over dad duty with his flesh and blood. Bill can’t stand Thorne and he especially doesn’t want a Forrester raising his son.

So Bill will probably punch back if Katie does go the full custody route. He may not have a great case as a dad, but he’s pretty connected and has been known to bribe a judge or two. Katie could really be opening herself up to a nasty legal battle, and she could conceivably lose if Bill plays dirty.

Do you think that Katie will go after full custody of Will? And will this kick off a nasty custody battle between Katie and Bill? Stay tuned to the CBS soap and don’t forget to check CDL often for the latest Bold and the Beautiful spoilers, updates, and news.