The Bold and the Beautiful Spoilers: Wednesday, April 25 – Hope and Steffy’s War Spirals Out of Control – Ridge Plays Dad to Liam

BY Heather Hughes on April 24, 2018 | Comments: one comment
Related : Soap Opera, Spoiler, Television, The Bold and the Beautiful 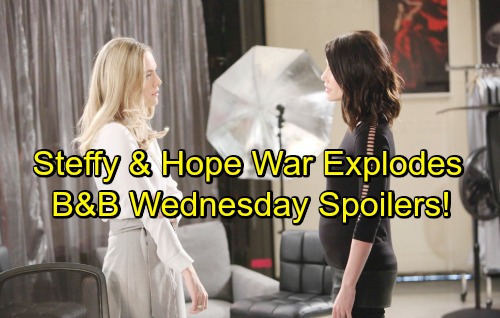 The Bold and the Beautiful (B&B) spoilers for Wednesday, April 25, tease that Ridge (Thorsten Kaye) will try to undo Hope’s (Annika Noelle) damage. He can tell she’s making progress with Liam (Scott Clifton) and that’s hurting Steffy’s (Jacqueline MacInnes Wood) reconciliation chances. Ridge was furious when he learned about Liam’s new address. He may hope he can talk some sense into him.

Ridge will meet up with Liam for a chat on Wednesday. He’ll go for a surprising strategy as he works to win Liam over. Ridge knows how angry Liam was when he found out about Bill’s (Don Diamont) betrayal. Things aren’t quite as strained now, but there are still major issues between them. Liam may never truly get over his father’s actions.

That’s why Ridge will try to step up as a substitute dad. He’ll insist that he cares about Liam and is willing to serve as a father figure. Ridge will hope that he can butter Liam up and make him see that they’re all a family. He won’t want Liam to destroy what’s good in his life because of Bill.

Of course, Bill wasn’t the only one in bed at the Forrester guesthouse. Steffy was a willing participant in the hookup that broke Liam’s heart. Ridge will put the blame solely on Bill as usual, but Liam still won’t be sure he can get past Steffy’s role in it. All of this has certainly been tough on him.

While Ridge and Liam debate the situation, we’ll see an explosive showdown elsewhere. The Bold and the Beautiful spoilers say Hope and Steffy will really let each other have it! B&B fans can expect this shouting match to get out of hand, so it looks like Liam will intervene later. He’ll do his best to settle his love interests down and make sense of what he wants.