The Bold and the Beautiful Spoilers: Steam Wedding Delay of Doom – Liam’s Decision Spells Disaster for Steffy, Hope Victory Ahead

BY Marcy Cohen on July 10, 2018 | Comments: one comment
Related : Soap Opera, Spoiler, Television, The Bold and the Beautiful 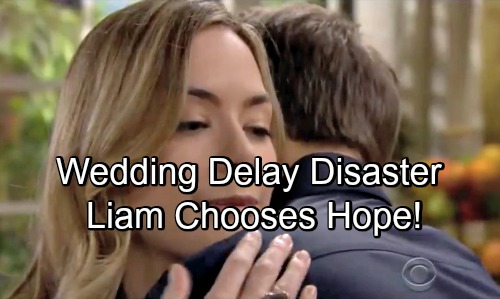 The Bold and the Beautiful (B&B) spoilers tease that Hope’s (Annika Noelle) pregnancy will continue to bring major changes. This baby already caused a huge shift when Liam (Scott Clifton) decided to put his wedding on hold. He’s not sure he’s in a position to marry Steffy (Jacqueline MacInnes Wood) or anyone else right now. Liam admitted he needs time to figure out what this kid means for all of them.

Of course, this postponement should spell disaster for Steffy. She acted like she understood Liam’s choice and that’s probably true on some level. However, Steffy also knows Liam could drift back in Hope’s direction. She needed to lock Liam down with marriage, so the fact that he’s taking it off the table is a crushing blow.

Nevertheless, Steffy will hold out hope that they can still tie the knot. She certainly won’t give up this dream without a fight. The problem is Hope will be fighting, too! As her baby bump grows, so will Liam’s feelings. Liam and Steffy grew closer throughout her pregnancy, which means the same thing should happen with Liam and Hope.

Despite the complications, Liam views this “Lope” baby as a miracle. As time goes on, he may begin to see it as a sign. Liam could easily decide he’s meant to be with Hope and always has been. One woman and child will get the short end of the stick no matter what, so Liam might as well follow his heart here. The Bold and the Beautiful spoilers say that could bring some severe pain for Steffy.

In other words, Steffy’s facing a B&B wedding delay of doom. The longer “Steam” waits to remarry, the greater the chances of Hope and Liam’s reunion. Plus, Bill (Don Diamont) will likely stick to Steffy like glue again. Once Bill hears about Hope’s pregnancy, he’ll see this as an opportunity to win Steffy over. The countdown is on for more passionate speeches and sneaky plans.

If Liam was 100 percent committed to Steffy, he would’ve kept the wedding on track. Instead, Liam’s choosing to wait and that means waffling is inevitable! Will Liam indeed get back together with Hope? Does Bill have a shot with Steffy after all?