The Bold and the Beautiful Spoilers: Steffy and Hope Baby Mama Battle – Desperate Rivals Fight for Liam and Their Families 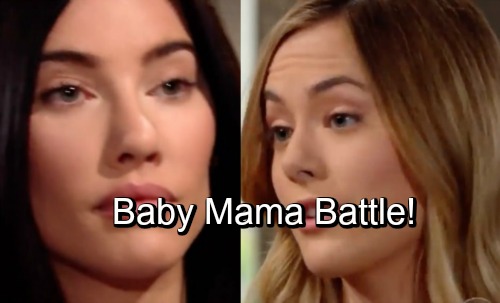 The Bold and the Beautiful (B&B) spoilers tease that with Brooke’s (Katherine Kelly Lang) full support, Hope (Annika Noelle) will make a big decision. Her pregnancy really changes her situation with Liam (Scott Clifton). If Hope actually gives birth and the baby survives, she’ll be tied to Liam forever.

Hope was willing to step aside for Steffy (Jacqueline MacInnes Wood) and Liam’s family before, but things are different now. She’ll be building a family of her own with Liam, so she won’t see why she should have to sacrifice what she wants. The Bold and the Beautiful spoilers say Hope will show off some fierce determination and get down to business.

Hope will feel like she has to step up her game and win Liam back. She’ll think her child should live in a two-parent home with lots of love. Naturally, that’d mean Steffy would lose the same thing. Hope might feel a hint guilty about that, but she may convince herself that her actions are justified.

After all, Steffy slept with Bill (Don Diamont) and set all this in motion. Everything that came after that night is a consequence of that terrible choice. Steffy made her bed and now she has to lie in it. Of course, you could argue that Steffy has more than paid the price for her behavior. That’s probably true – at least according to soap standards.

Nevertheless, Hope has every right to go after Liam. She’s got just as much at stake now. There are two Liam-loving women as well as two babies. Unfortunately, there can only be one love triangle winner and that’s why this is going to get complicated. Liam will get caught in a ruthless struggle for his heart.

Before this battle officially erupts, these foes will face each other. B&B fans can expect Hope and Steffy to make their positions clear. Neither one of them is backing down, so they’ll agree that the war is on. The Bold and the Beautiful spoilers say they’ll exchange shocking warnings about what’s ahead. Don’t be surprised if these rivals play dirty!

It sounds like some exciting scenes are coming up on the CBS soap. We’ll give you updates as other news emerges. Stay tuned to B&B and don’t forget to check CDL often for the latest Bold and the Beautiful spoilers, updates, and news.