The Bold and the Beautiful Spoilers: Week of July 9-13 – Bitter Battles, Stunning Accusations and Hidden Agendas

BY Heather Hughes on July 7, 2018 | Comments: one comment
Related : Soap Opera, Spoiler, Television, The Bold and the Beautiful 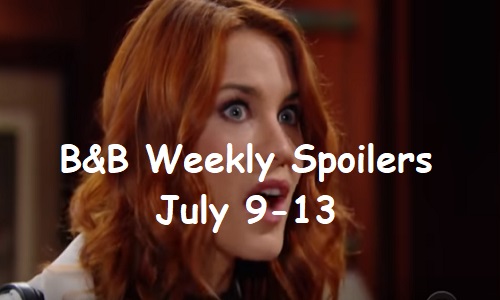 The Bold and the Beautiful (B&B) spoilers for the week of July 9-13 tease that some big surprises are in store. For starters, a secretive woman will show up with a hidden agenda. Kiara Barnes will make her debut as Zoe and it seems she may share a past with Xander (Adain Bradley). She’ll spy on him as he grows closer to Emma (Nia Sioux), so she’s likely an envious former flame.

Later, Zoe will approach Emma and strike up a conversation. She’ll keep Emma out of the loop on who she is and what she’s up to. Zoe will hope she can forge a friendship, but it’s only because of her sneaky goals. This newbie’s definitely going to be trouble!

In fact, Zoe will manage to get wrapped up in Sally (Courtney Hope) and Wyatt’s (Darin Brooks) business. She’ll eavesdrop as Sally gripes about Hope (Annika Noelle) and the warning she received. Despite the tension between them, Sally will be determined to prove herself. She’ll believe if she works hard enough, she can win Hope’s approval and carve out her spot at Forrester Creations.

Wyatt will think Sally’s optimism is admirable, but she should face some disappointment later. The Bold and the Beautiful spoilers say Katie (Heather Tom) and Thorne (Ingo Rademacher) could make some stunning accusations soon. After Ken (Danny Woodburn) the IT guy does some investigating, they’ll believe Sally’s behind Hope’s threat.

Of course, there’s a good chance Thorne and Katie will be wrong. On soaps, the easiest solution usually isn’t the right one. This may just be part of Sally’s uphill battle for redemption. It could also be a way to strengthen Sally and Wyatt’s (Darin Brooks) bond. If Wyatt has faith in Sally and fights to prove her innocence, that could really seal the deal on this B&B romance.

In the meantime, Wyatt will get a visit from a couple family members. First, Liam (Scott Clifton) will arrive and unload all the daddy drama. He’ll tell Wyatt that Hope’s pregnant and wonder how he’s going to handle two families.

Liam will be torn between the two most important women in his life, so he’ll want Wyatt’s advice. Next, it’ll be Bill’s (Don Diamont) turn to pop in. He’ll apologize for how he treated Wyatt after the “Lope” wedding fiasco. As Bill works to make amends, Wyatt will mention Hope’s pregnancy news. The Bold and the Beautiful spoilers say Bill will certainly try to use this info to his advantage.

Over with Hope and Steffy (Jacqueline MacInnes Wood), they’ll declare war and begin desperately fighting for Liam. These two will hold nothing back as they attempt to win their mutual man! We’ll give you updates as other B&B details emerge. Stick with the CBS soap and don’t forget to check CDL often for the latest Bold and the Beautiful spoilers, updates, and news.