The Bold and the Beautiful Spoilers: Liam Loves Hope More Than Steffy – Steamroller in Los Angeles? 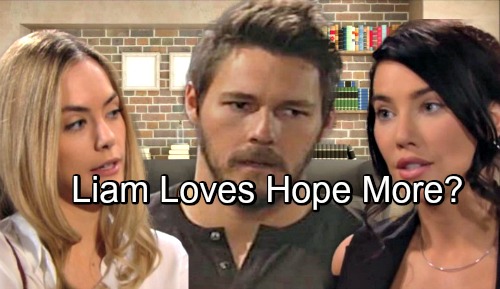 The Bold and the Beautiful spoilers tease that Hope (Annika Noelle) will end up with Liam (Scott Clifton) after all. Oh, it will take awhile for them to fully reunite, as this is a soap world. But the last days of this edition of Steam now appear to be telegraphed as rapidly descending, if not crashing down.

Baby Kelly, you’re going to have a brother, or sister! Though your sibling(s) mom, Hope, could have twins, or triplets, or more, right?

Hope hasn’t one-upped Steffy (Jacqueline MacInnes Wood). Instead, she’s effectively countered what appeared to be a destined relationship that was finally affirmed by the arrival of Steam’s first child. Another life (or lives) could have followed and may still. Still, hmm, let’s shift there at this instant.

Dollar Still just officially ended, as Bill (Don Diamont) granted Steffy her freedom. The off-centered head of the Spencer clan was actually serious. He had a change of heart after Steffy had a recent and very direct conversation with him. Taylor (Hunter Tylo) was subsequently released from the hook she hung herself on, which also meant that Steffy was free to marry Liam as soon as possible.

Okay, now loop back to Noelle’s intriguing character. Why is Hope intriguing some readers may ask? Well, did she accidentally conceive Liam’s child, or was that her underlying desire, or plan? Wait, was that Liam’s subconscious intent as well, despite the reaction shot he offered under the July Fourth fireworks’ sky?

By not taking precautions both characters knew that the possibility of conception existed. In this case, it happened and baby Liam, Jr., or Hope II is now scheduled to be born late this coming winter.

Shift to a scene where Steffy is at the cliff house taking care of Kelly. The Bill dilemma appears shelve and Steam’s remarriage likely happening sometime this month. Then, Liam comes home and tells Steffy something that rips them apart, possibly forever.

Yes, Liam loves Hope more than Steffy. However, it’s fair to say that he will love his first-born child and his next one, or one’s, equally. But there already was a special connection between him Hope. So the angle that’s now changed is Hope’s rise to Steffy’s plane, as she’s also become the mother of Liam’s child.

Will Liam beat expectations and not revert to form, meaning a measured glide back to Hope’s side? Is it possible that Steam still remarries even considering Hope’s pregnancy? Will Bill’s gut-feel about Lope reuniting and Dollar Still forming now play out?

The answers to the questions raised in the last paragraph are what B&B fans will be watching for. CDL is a leading source for everything linked to The Bold and the Beautiful. Check back regularly for B&B spoilers and news!