The Bold and the Beautiful Spoilers: Sally’s Shocking Discovery, Zoe to Blame for Online Threats to Hope – Big Twist to Mystery

BY Marcy Cohen on July 10, 2018 | Comments: one comment
Related : Soap Opera, Spoiler, Television, The Bold and the Beautiful 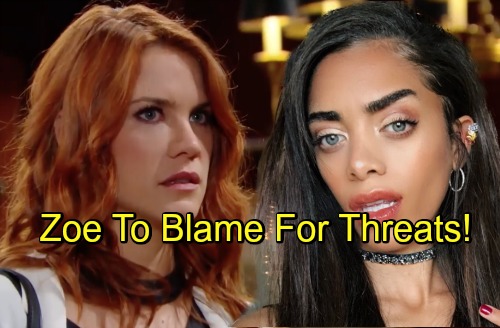 The Bold and the Beautiful (B&B) spoilers tease that some big twists are coming up. Now that Zoe’s (Kiara Barnes) entered the picture, things are becoming a bit clearer regarding the threat at Forrester Creations. Zoe’s been painting the mural at Wyatt’s (Darin Brooks) place, so that gave her the opportunity to steal Sally’s (Courtney Hope) laptop. She later tucked it away in the sofa to cover.

Since we know Sally will be accused of posting the comments, it makes sense that Zoe’s actually to blame. Here’s where the situation could get a little muddled. Zoe’s obviously done her research. She knew where to find her ex, Xander (Adain Bradley), along with the new girl in his life. Emma’s (Nia Sioux) social media presence helped out with that.

Of course, Emma’s been working on the Hope for the Future line. These comments are coming up on the line’s website. Those are important facts to keep in mind. B&B fans will recall that the first comment said, “I’m coming after U. Watch out!” It was posted under a picture of Hope…and Emma.

Naturally, Liam (Scott Clifton) and Thorne (Ingo Rademacher) assumed Hope was being targeted. All the other comments were about Hope, so that was understandable. After all, this line is Hope’s brainchild and Emma’s just a lowly intern. They must think no one would care enough to make Emma a target, but Zoe certainly would.

However, there’s a tricky element thanks to Zoe’s conversation with Wyatt and Sally. She listened to them discuss Sally’s feud with Hope and quickly chimed in. They noted that it wasn’t the first time Zoe had heard Sally talk about Hope. Zoe suggested that Hope seemed jealous, so that opens up an interesting Bold and the Beautiful possibility.

There’s a chance that Zoe has switched over to targeting Hope for Sally’s sake or at least will soon enough. Then again, this part of the drama could be a red herring. Zoe could even be trying to kill two birds with one stone. Whatever the case, The Bold and the Beautiful spoilers say Sally will be on a mission for answers on next week’s new B&B episodes, July 16-20. She’ll try to figure out who’s actually to blame for the online threats.

Later, B&B viewers can expect Zoe to make an admission. Will she confess to posting the comments? If Sally backs her into a corner, Zoe could get rattled and come clean. Sally has to clear her name somehow! We’ll give you updates as other news emerges. Stick with the CBS soap and don’t forget to check CDL often for the latest Bold and the Beautiful spoilers, updates, and news.