The Bold and the Beautiful Spoilers: Hope Furious Sally Designs For The Intimates Line – Demands Steffy Fire Her

BY hellodrdavis on September 14, 2018 | Comments: one comment
Related : Soap Opera, Spoiler, Television, The Bold and the Beautiful 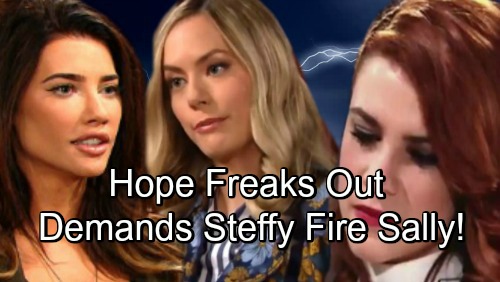 The Bold and the Beautiful spoilers tease that Hope (Annika Noelle) is in for a shock. She’s been used to having quite a reign at Forrester with her Hope For The Future (HFTF) line. She oversaw the line, approved the designs, supervised the talent, and even managed the interns. She had a considerable amount of power…at least until The Intimates Line came back into swing.

Now, with Forrester putting HFTF on the back burner, Hope’s level of power and influence within the company is falling fast. She’s watching Steffy (Jacqueline MacInnes Wood) get all the advantages that she once had, and it hurts. All the buzz that once surrounded HFTF is now surrounding The Intimates Line.

But there’s one thing in particular that’s going to irk Hope, and it has to do with Sally (Courtney Hope). When Hope was large and in charge with HFTF, she made a big decision regarding Sally. She relegated Sally to grunt work and told her flat out that she’d never design at Forrester.

But Sally persevered, hoping that someday someone would give her a chance. She didn’t put too much stock in Hope’s words, and she kept on sketching and hoping that somehow she’d get an opportunity.

Sally even developed a backup plan when she learned that Ridge (Thorsten Kaye) was going to choose either HFTF or Intimates to get Forrester backing; she started sketching lingerie, thinking that if The Intimates Line won out, she might have an opportunity to design there.

Well, watching and waiting paid off, as B&B spoilers say that Sally will indeed get her chance to design at Forrester, thanks to Steffy. It looks like former rivals Sally and Steffy will be working together on The Intimates Line going forward.

And that’s going to infuriate Hope! The Bold and Beautiful spoilers tease that Hope is going to feel undermined, not to mention shut out of the decision-making. She’s going to have to watch Sally designing, succeeding, and helping The Intimates Line really take off.

How long until Hope demands that Steffy reject Sally’s designs, or even fire Sally? It seems just like something Hope would do. She’ll want to save face, but chances are Steffy won’t budge. Steffy will do whatever it takes to make Intimates a raging success.

Do you think that Hope’s going to be able to handle the stress of watching Sally succeed with Steffy and The Intimates Line? Stay tuned to the CBS soap and don’t forget to check CDL often for the latest Bold and the Beautiful spoilers, updates, and news.