The Bold and the Beautiful Spoilers: Hope Leans on Wyatt After Heartbreaking Baby Drama – Needs Support Once Liam Drifts Toward Steffy 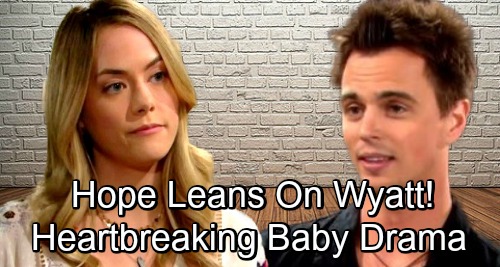 The Bold and the Beautiful (B&B) spoilers tease that Liam (Scott Clifton) and Hope’s (Annika Noelle) bliss can only last so long. They’re already setting some kind of record for a solid Liam relationship! He’d normally be waffling over to another woman by now, so the countdown to destruction has surely begun. There’s just no way Liam can stay committed to Hope indefinitely.

Liam and Hope are excited about their impending bundle of joy, so that’s helping them stick together right now. Of course, Steffy’s (Jacqueline MacInnes Wood) all about her career. That’s probably helping, too. Steffy’s staying out of “Lope’s” way and not presenting herself as an option.

Would things be different if Steffy were actively pursuing Liam? There’s a good chance Liam would at least be tempted to reunite with her. Steffy could indeed bring that temptation down the road. After all, there’s bound to be more baby drama in store. That could change the game and set up a very different situation for Liam.

Hope had a bit of a scare early on in the pregnancy. It’s going well now, but it’s just a matter of time before another unexpected blow comes up. Will B&B really let Liam have two healthy baby girls this close together? The Bold and the Beautiful could easily kill off Liam’s second daughter and leave this marriage crumbling. Liam and Hope may not be able to get past that kind of sorrow.

Naturally, a Steffy and Liam reunion could result from that. If Liam splits from Hope, he’ll inevitably end up back with Steffy. It’s a no-brainer. What about Hope though? Who would mend her broken heart? Perhaps Wyatt (Darin Brooks) could step up in Hope’s time of need. That would create some good friction with Sally (Courtney Hope) and spark a new love triangle.

Many viewers have been hoping for a Hope and Wyatt reboot. It’d be fun for B&B to give it a shot now that Noelle’s in the role. Why not see what their chemistry’s like? The Bold and the Beautiful spoilers say Hope will need someone to lean on eventually, so stay tuned to see if it’ll be Wyatt.

Are you excited to see what’s next for Hope and Liam? Will a baby crisis send them down new paths? We’ll give you updates as other B&B news comes in. Stick with the CBS soap and don’t forget to check CDL often for the latest Bold and the Beautiful spoilers, updates, and news.