The Bold and the Beautiful Spoilers: Hope Trades One Love Triangle for Another – Fights Sally in War for Wyatt’s Heart 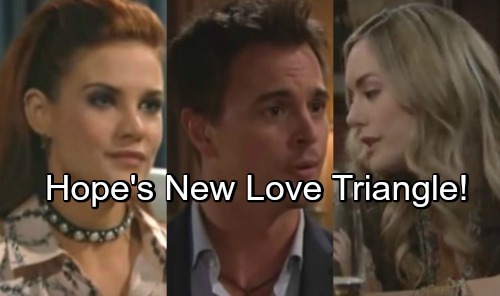 The Bold and the Beautiful (B&B) spoilers tease that Hope (Annika Noelle) will push through her heartbreak and focus on what’s next. Liam’s (Scott Clifton) decision to be with Steffy (Jacqueline MacInnes Wood) will leave Hope distraught, but there are other fish in the sea. In fact, Hope may end up returning to a familiar one soon enough.

B&B fans know there aren’t a lot of options for Hope on canvas. Some viewers have suggested that Hope should be with Detective Sanchez (Jeremy Ray Valdez), but they don’t seem like they have long-term couple potential. When it comes to a soap, history tends to win out. Since Hope can’t have Liam, will she drift toward her back up again? Will Hope find herself longing for Wyatt’s (Darin Brooks) love?

The Bold and the Beautiful spoilers say we’ll soon see trouble in “Watie” paradise. There’ll be a few good reasons for the drama. For starters, Wyatt and Katie (Heather Tom) will realize the flaws in their relationship. It’s one thing to make googly eyes at each other and hit the sheets constantly. It’s quite another when you’re talking about coming together to raise a family.

Bill’s (Don Diamont) furious with Wyatt right now, so the custody issue could come up once more. Even if they can get Bill to back off, is Wyatt ready to go from half-brother to stepfather? He’ll eventually realize it’s kind of a weird situation. Katie may begin to see that, too.

Plus, their age difference could finally hit them hard. Katie and Wyatt are in different places in their lives. They naturally want different things, so that could drive them apart. Thorne (Ingo Rademacher) will be waiting to snatch up Katie, so Hope might as well pounce on Wyatt. Of course, she may not be the only one pouncing!

Sally (Courtney Hope) is headed back to The Bold and the Beautiful, so she could be another key player here. B&B may have another love triangle in mind. Will Hope trade one war for another? Will she go from fighting for Liam to fighting for Wyatt?

Hope might actually have the upper hand this time around. We’ll give you updates as other B&B news comes in. Stay tuned to the CBS soap and don’t forget to check CDL often for the latest Bold and the Beautiful spoilers, updates, and news.