BY Kinsley Goldman on November 26, 2018 | Comments: one comment
Related : Soap Opera, Spoiler, Television, The Bold and the Beautiful 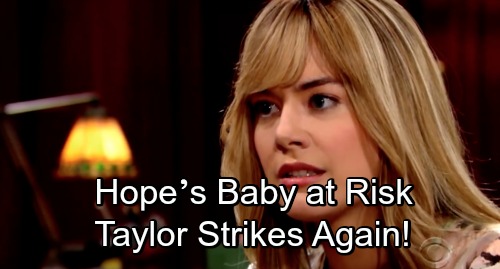 The Bold and the Beautiful (B&B) spoilers tease that some scary moments could be looming for Hope (Annika Noelle). Other than a brief hiccup early on, Hope’s pregnancy has gone smoothly. That’s pretty much a guarantee that some baby drama’s coming up.

Instead, Hope will probably face a nightmare. Since we’re bracing for the worst, let’s consider what might cause harm to Hope and her baby. What’s something that could lead to a total tragedy and fits with the current storyline? Taylor (Hunter Tylor) seems she could fit in this hot plot.

The Bold and the Beautiful spoilers say Taylor will come back on the scene this week, but her visit won’t be a welcome one. Even the friends and family members who love Taylor will be stressed out. Taylor’s a real mess and she’s only going to get worse as times goes on. She’ll target both Hope and Brooke (Katherine Kelly Lang), which sounds like a recipe for disaster.

Several major confrontations are on the way, so those will probably escalate in the weeks ahead. Taylor resorted to violence before when she shot Bill (Don Diamont). Could she whip that gun out again and commit another attempted murder?

There are couple ways that could affect Hope. It’s possible Taylor could shoot her in a vengeful rage over Steffy (Jacqueline MacInnes Wood). However, that seems a little over the top. B&B fans probably wouldn’t like the idea of Taylor shooting a pregnant woman on purpose.

Perhaps a better alternative would be if Taylor was about to shoot Brooke and Hope was injured protecting her. She could take the bullet as a reflex or maybe inadvertently. If The Bold and the Beautiful wanted another option, they could simply set up some scenario where it caused a terrible fall. But gun violence isn’t needed to bring about a scenario where Taylor’s angry and wild behaviour puts Hope’s pregnancy at risk.

One way or another, Taylor could certainly put Hope and her baby at risk. Do you think Hope and Liam’s kid will survive? Will Taylor accidentally lead to a devastating death? We’ll give you updates as other B&B news comes in. Stay tuned to the CBS soap and don’t forget to check CDL often for the latest Bold and the Beautiful spoilers, updates, and news.