The Bold and the Beautiful Spoilers: Hot Promo for Week of July 9-13 – Hope Warns Steffy to Prepare for Battle – Sally’s Wrongfully Accused 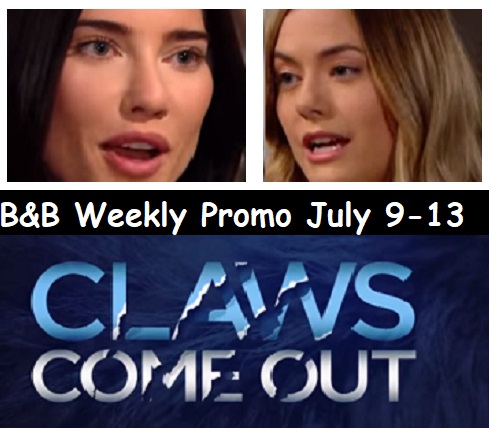 The Bold and the Beautiful (B&B) spoilers for the week of July 9-13 tease that we’ll see some heated showdowns. First, let’s talk about Hope (Annika Noelle) and Steffy’s (Jacqueline MacInnes Wood) battle. Now that Hope’s pregnant, their feud is back on in a big way.

Brooke (Katherine Kelly Lang) will make sure Hope keeps her eye on the prize. She thinks her daughter should be Liam’s (Scott Clifton) main squeeze, so she’ll do her part to make it happen. With Brooke nudging her along, Hope will gain some serious confidence. She’ll intend to fight with everything she’s got!

The Bold and the Beautiful spoilers state that Hope will give Steffy a warning. She’ll declare that she’s not giving up on her future with Liam. Naturally, Steffy will scoff at Hope’s optimism. She’ll wonder if Hope seriously believes Liam’s going to come back to her. Steffy will urge Hope to keep dreaming, but her pregnant rival will refuse to throw in the towel.

Hope will insist that she’s not just going to hand Liam over. She’s tired of playing the martyr and watching Steffy live the life she always wanted. Once Hope makes her spiel, Steffy will know where they stand. They’ll determine that they’ll just have to duke it out and let the best woman win.

B&B fans can expect Hope and Steffy to play dirty if need be. All’s fair in love and war, especially on The Bold and the Beautiful! Meanwhile, Sally (Courtney Hope) will reel over some stunning news. Thorne (Ingo Rademacher) and Katie’s (Heather Tom) investigation will point straight in Sally’s direction, so they’ll blame her for the website threats.

Katie will fold her arms and give Sally a smug look. She’ll ask if Sally really thought she was going to get away with this. Of course, Sally will deny any wrongdoing. She’ll assure Katie and Thorne that they’ve got the wrong person. Sally won’t care what their findings revealed. Why would she sabotage herself within the first few days on the job? Sally’s a lot of things, but stupid isn’t one of them.

While Sally defends herself, Bill (Don Diamont) will pay Wyatt (Darin Brooks) a visit. He’ll blow his son away when he offers an apology. Afterward, The Bold and the Beautiful spoilers say Bill will get updates on Hope’s pregnancy. He’ll realize he may have a shot with Steffy after all, but he’ll have to be smart about this.

B&B has plenty of hot episodes coming up, so stay tuned for all the action. We’ll keep you posted as other details emerge. Stick with the CBS soap and don’t forget to check CDL often for the latest Bold and the Beautiful spoilers, updates, and news.