The Bold and the Beautiful Spoilers: Leaked Script Shows Taylor Back In Action – Hunter Tylo Back On Set Filming?

BY hellodrdavis on November 11, 2018 | Comments: one comment
Related : Soap Opera, Spoiler, Television, The Bold and the Beautiful 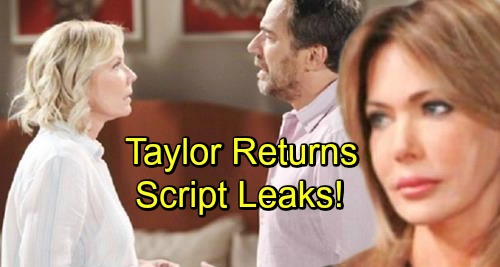 The Bold and the Beautiful spoilers tease that Taylor (Hunter Tylo) fans have a reason to celebrate. It appears that Taylor will be back on canvas this December. Last time we saw Taylor was for Hope (Annika Noelle) and Liam’s (Scott Clifton) wedding, when she and Brooke (Katherine Kelly Lang) had the infamous cake fight.

As reported by the Queen Steffy Forrester B&B Facebook group, a cover of a script for the December 10, 2018 episode of B&B lists Taylor as a cast member. That doesn’t necessarily mean that December 10th will be her first or only air date, but it does indicate that she’s coming back.

Over the summer, B&B spoilers, including an article in SOD, indicated that Taylor would be back this autumn, but so far that hasn’t materialized. It certainly looks like her appearance got pushed to early December. 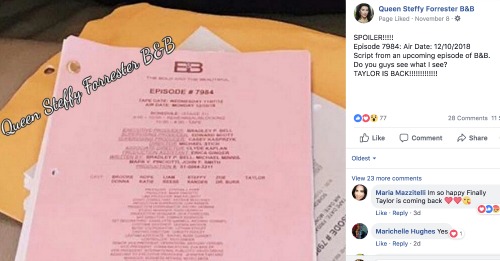 But what will Taylor be returning for? She may simply be coming to visit Steffy and baby Kelly (Chloe Teperman), or there may be a juicy storyline waiting for her. Interestingly, the leaked script cover lists a Dr. “Burns” or “Burke” as well, leading some fans to speculate that Taylor could be returning because someone has a health issue.

Could there potentially be a medical problem with baby Kelly? That would certainly warrant a return by Taylor, but it wouldn’t give Taylor herself much of a story. Many fans are hoping that Taylor gets a meaty story, such as reconnecting with Ridge (Thorsten Kaye), now that he and Brooke are experiencing marital difficulties.

Are you excited to see Taylor return this December? Stay tuned to the CBS soap and don’t forget to check CDL often for the latest Bold and the Beautiful spoilers, updates, and news.