BY Heather Hughes on November 11, 2018 | Comments: one comment
Related : Soap Opera, Spoiler, Television, The Bold and the Beautiful 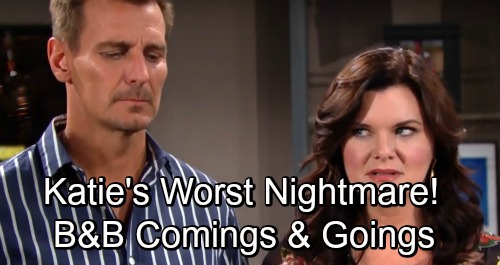 The Bold and the Beautiful (B&B) spoilers tease that we’ve got some comings and goings news to share. First, we should mention another Ken (Danny Woodburn) sighting. Bill’s (Don Diamont) IT guy will pop back up on Monday’s new B&B episode, November 12, to conclude his latest stint.

Next, Joe Lando will reprise his role as Judge McMullen. He’ll be appearing every day from November 12-15, so he’ll clearly be a big part of the drama this week. The Bold and the Beautiful spoilers say Bill will have both Ridge and the judge right where he wants them! His evidence could land the culprits behind bars and lead to a major custody shakeup.

Fortunately, Brooke (Katherine Kelly Lang) will take steps to make sure that doesn’t happen. Her plea should get Bill to relent. Nevertheless, Katie will be awfully panicky in the meantime. In an interview with Soap Opera Digest, Heather Tom weighed in on all the Bill chaos. She noted that Katie would be terrified of her ex’s potential wrath.

“Even thought Katie had nothing to do with what Ridge did, she’s afraid Bill won’t see it that way,” Tom said. “That would be her worst nightmare come to life if that were to happen.” Tom added that trouble could be brewing in Thorne (Ingo Rademacher) and Katie’s relationship. B&B fans can expect some exploding tension in the coming episodes.

“This is going to have big repercussions for everybody, so I definitely think it will cause friction between everyone involved,” Tom warned. The Bold and the Beautiful spoilers say the newlywed boat will be rocked, so how long will “Thatie” really last? Marriages tend to have a rapidly approaching expiration date on the CBS soap.

In other news, a B&B alum has a brand-new role. Jacob Young (ex-Rick) will portray Jeff in a new Hallmark movie for the holidays. It’s called Christmas Made to Order and you can catch it on December 23. If you’re missing Rick around Forrester Creations, be sure to check out Jeff and whatever trouble he might stir up.

That’s it for comings and goings! We’ll give you updates as other B&B details emerge. Stay tuned to the CBS soap and don’t forget to check CDL often for the latest Bold and the Beautiful spoilers, updates and news.